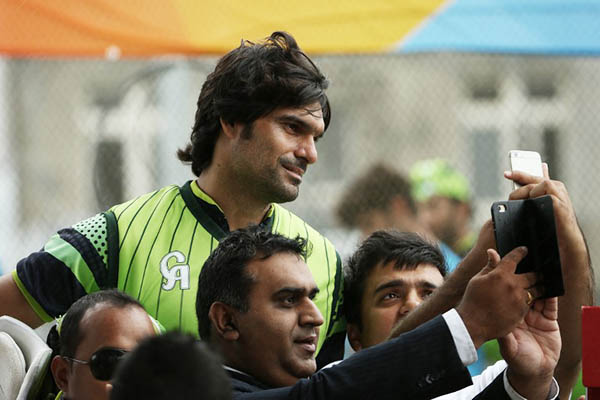 Fast bowler has been ruled out of World Cup due to a stress fracture.

Giant Pakistan fast bowler Mohammad Irfan was ruled out of the remainder of the World Cup on Tuesday because of a stress fracture to his pelvis, the cricket board announced.

The 32-year-old, who took eight wickets at the tournament, first felt the injury in the 129-run win over the United Arab Emirates two weeks ago when he bowled just three overs. He played in the crucial victory against South Africa before missing Sunday’s game against Ireland, which Pakistan won to secure their place in the last-eight.

The injury is a major blow to the 1992 champions’ chances of defeating four-time winners Australia in the quarter-final at the Adelaide Oval on Friday.

“Irfan underwent an MRI scan on Monday afternoon and the radiologist’s report showed a stress injury of the pelvis but was inconclusive,” said a PCB release. Brad Robinson, the Pakistan team’s physiotherapist, ordered a more detailed scan, which was carried out Tuesday afternoon, and it reconfirmed a stress fracture in the pelvis. “This injury rules Irfan out of the World Cup,” said Robinson.

Pakistan team management will not immediately ask the selection committee back home for a replacement player, but will wait until the result of Friday’s quarter-final.

Irfan, at seven-feet one inch, the tallest man to play international cricket, took eight wickets in the five matches he played at the World Cup. Before Irfan was ruled out, former captain Wasim Akram told AFP that the player needed to work on his fitness. “Irfan is different,” said Wasim of the 7’1’’ paceman. “His body stretches more and needs careful handling.”