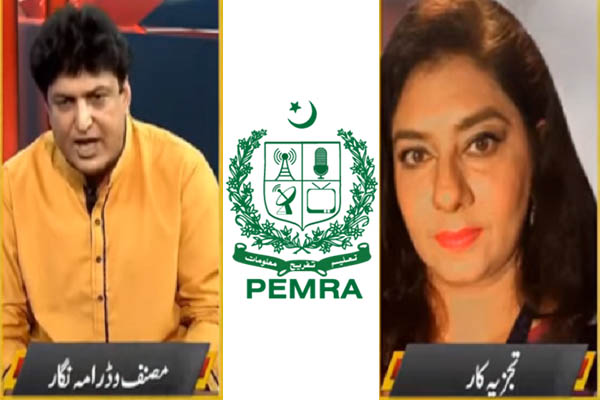 “PEMRA is issuing a show-cause notice to NEO TV program Ayesha Ehtesham Kay Sath over its broadcast of [a] vulgar and obscene chat and has ordered a response within seven days,” said a press release posted on the regulatory body’s Twitter page. “Under the relevant PEMRA regulations, a strict investigation will be taken,” it added.

Similarly, PEMRA issued another show-cause notice to Geo News, also for seven days, over its re-broadcast of the offending footage during a discussion on it in the show, Report Card. “

The incident has gone viral on social media, with supporters of the Aurat March taking aim at Qamar and demanding a boycott of all his work. Even high profile personalities, such as Mahira Khan, Adnan Malik, and Senator Sherry Rehman, have said they would no longer appear on any Neo TV show until the channel issues a full apology to Sirmed and bans Qamar from appearing on any of its programming.

Amid the backlash, the executive director of Neo TV, as well as host Ayesha Ehtesham, have apologized for the segment. “Please accept my sincere apology on the incident which happened today on our screen. Being Head of Neo News I am extremely sorry for that and strict action will be taken,” said Nasrullah Malik. “We condemn the behavior of Khalil Qamar,” he added. Host Ehtesham, meanwhile, posted on Twitter: “What happened yesterday in my show was an extremely sorry state of affairs. I could not imagine things could turn out to be so rough and abusive.”

Qamar has yet to issue any statement.