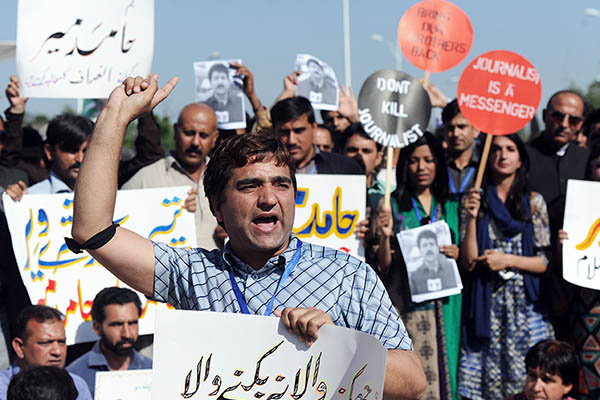 Jang Group demands formal notification of suspension, as it sues military for defamation and reparation of monetary losses.

The Pakistan Electronic Media Regulatory Authority (PEMRA) on Friday suspended Geo News over a row with the Inter-Services Intelligence (ISI) spy agency, according to an official statement.

The government’s media regulatory body “unanimously decided to immediately suspend the license of the said channel for a period of 15 days” besides imposing a fine of Rs. 10 million, the statement said.

The channel locked horns with the ISI, the country’s top intelligence agency, after an anchor of the television channel was shot in Karachi in April. Hamid Mir was shot three times in the attack but survived. His family blamed the chief of the ISI, Zaheer-ul-Islam, for his murder.

The channel broadcast images of the ISI chief along with allegations by Mir’s family members for eight hours, infuriating the military, which filed a complaint to PEMRA through the defense ministry, seeking Geo’s closure.

Confusion remains over how the suspension of the license will be implemented. Many cable operators have already started taking the channel off air, but the management has vowed to continue broadcasting until it receives a formal notification from PEMRA.

Earlier, the Jang Group, which owns and operates Geo News, had announced that it was suing the Defense Ministry, the ISI, and PEMRA for defamation. “Geo and Jang Group has [sic] served legal notice on the Ministry of Defense, Inter-Services Intelligence (ISI) and Pakistan Electronic Media Regulatory Authority (PEMRA) for defaming and maligning the group,” the media organization said in a report published in The News, which is also owned by the parent company. “More than 8,000 journalists, workers and professionals attached to the group and their families are not only being harassed but also attacked and tortured across Pakistan,” it added.

Geo News has also demanded that the ISI retract its accusations and issue a public apology, in addition to paying Rs. 50 billion in damages, within 14 days.