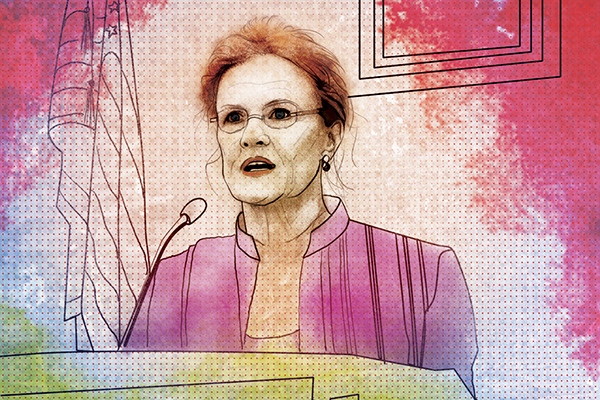 Robin L. Raphel has a long designation and an even longer association with Pakistan. The senior advisor on Pakistan at the Office of the Special Representative for Afghanistan and Pakistan at the U.S. State Department in Washington, D.C., first came to the country in 1975 to work as a financial analyst for USAID. Her ex-husband, Arnold, was the American ambassador in Islamabad and died with Pakistani president Gen. Zia-ul-Haq in a plane explosion in 1988. We spoke with Raphel, herself a former U.S. ambassador, in Islamabad recently about aid, Afghanistan, Pakistan-U.S. ties, and more. Excerpts:

In 1996, you warned the U.N. Security Council that the Taliban should not be isolated. Do you feel the same way today?

I absolutely stand by that. It was too hard to see at the time how [Afghanistan] was going to go, but it looked to us that the Taliban had been a reaction to the warlords, who had been a reaction to the Soviets leaving. Between 1993 and 1994, we’d go to Afghanistan and meet with the usual cast of characters—Hekmatyar, Massoud, Rabbani, Wakil—and we’d say the same thing to all of them: there is no military solution to this, work out a political arrangement in which everyone has a voice acceptable to the broad population of Afghanistan. They pretended to listen but didn’t really. They’d start off every conversation with, ‘Thank you very much for all your help.’ All of them were always so polite, their mothers taught them well! They were conservative Pashtuns who were motivated in the first instance to disarm the warlords and restore a certain kind of law and order. But they morphed into something else, and when Al Qaeda came, it all began to get out of control.

Prime Minister Nawaz Sharif’s government has announced a hands-off policy on Afghanistan. What’s your take on his government’s performance a year in office?

Whether it’s the economy, energy, extremism or education, they have their priorities right. Their strong suit is on the economics side. Finance Minister Ishaq Dar is an amazing implementer. It’s like he’s got a computer in his brain because he doesn’t forget anything and can spit out statistics. He’s much better informed than anybody else in the room and it’s made a huge difference. They prioritized right in terms of approaching the problem. If you’re going to fix the economy, what do you do? You pick the low hanging fruit. Now it’s going to get harder and harder with this budget and how they’re going to deal with tax issues, but Dar has a plan. They’re also focusing very much on energy. The last government tried a number of times to set up an LNG terminal but they just couldn’t get it organized.

From your perspective, how well have Pakistan’s civilian governments performed?

I had someone say to me the other day, ‘Oh, you know the U.S. has changed; it’s not supporting the military government anymore.’ And I said, ‘Well, that would be because there isn’t one.’ It’s important to realize this; that the U.S. works with the government of the day. Pakistan is likely and finally, and I hope I’m right, on the civilian-government track now. You know something could fall out of the sky and cause the Army to want to behave differently, but right now that’s not the case. And to be fair to the previous governments, whoever came back into power after a long period of military rule was going to struggle. So they picked up the torch and carried it much further than anyone thought they would in the beginning. And I think Asif Ali Zardari deserves a lot of credit for that. He’s a very shrewd politician.

The U.S. Enhanced Partnership with Pakistan Act of 2009 was supposed to provide $7.5 billion in aid over five years. Why has only part of this materialized?

Funds get appropriated on an annual or two-year basis. In the first couple of years, we got the $1.5 billion per year [for Pakistan]. In recent years, we haven’t because overall levels are declining. At the end of the day, we will get to $7.5 billion. It will just take a little longer, maybe a couple of years. And in many ways, that’s okay. We did find that it took us longer to make well-informed decisions about what to do with the money. You’ve got to talk to people, talk to government, talk to civil society. You’ve got to figure out what else is going on in a sector. It takes time to spend money wisely. But I hasten to add, I’m not the Congress of the United States.

USAID has funded some 3,000 small-scale projects in the federally-administered tribal areas of Pakistan. Can you tell us more about this?

Basically the way it works is that we have U.S.-based contractors who can look over money and manage oversight. They went to Peshawar and hired a bunch of people—many of whom had worked for NGOs, some used to be in the Khyber-Pakhtunkhwa government. These people were integrated into the FATA Secretariat, even though they were paid by the contractor. So, representing the FATA Secretariat, these people would go to a village, get the community together with a political agent or tribal leaders, and say, ‘Okay, what is it that this community wants or needs most? Do you want a roof on your school, a water pump, a retaining wall?’ They would have to go through that process of coming to a consensus. They’d then do the job quickly and the villagers would say, ‘Ah, our government is actually pretty responsive’—which was the whole idea. We selected areas where there had been fighting and the insurgents had moved on somewhere else. It’s a really good system but it took a while to find its groove.

Was anti-America sentiment a challenge?

We’re doing this development work indirectly. We’re really helping the FATA Secretariat better carry out its responsibilities, which is the idea. It’s not a covert secret, but we don’t put the USAID brand on the hand pump. And, again, if you think what development is meant to be, our primary purpose, contrary to popular opinion, isn’t really [winning] hearts and minds for the U.S.—although we do like people to say thank you—it is to help Pakistan’s development accelerate because we believe if you have economic growth, more job opportunities mean better education and better health care, which means you’ll have a more stable society. That is the basics of it which we sometimes forget. Of course, we want people to know about the generosity of the American people.

More and more so, absolutely, but as I said, it took us some time to figure out what’s the best way to spend it. The popular view here used to be, ‘Well, they talk a lot, but where’s the beef?’We’ve overcome quite a bit of that and things are beginning to take shape. One of my favorite projects is the obstetrics and fistula center at Jinnah Postgraduate Medical Center in Karachi. Everybody knows it was a USAID-funded project and they’re happy with it and it’s such a good advertisement for our work.

Do you think USAID projects run the risk of always being overshadowed because of disagreements between governments?

I think people know better than that. You see it most profoundly when there are natural disasters. With the earthquake in 2005 and the floods in 2010, we were able, because we were nearby and are very responsive to natural disasters, to help. Governments come and go, but people know. What’s important, I think, is that people believe—and it’s important to make this distinction—that we’re helping them for the right reasons. That’s never more evident than in a disaster because there’s no political anything. Disaster strikes, people get on planes and start work. Nobody is thinking politics.

Will the United States continue its work in Pakistan even after the Afghanistan drawdown?

You never know and I can’t predict that. But this is a country that is important to U.S. interests. The stability challenge here will continue even after we’re out of Afghanistan. I’m optimistic about Afghanistan after the elections. It’s no longer the country it was in 1990. We recognized at the time that Afghanistan had sunk below the radar and it stepped way out of the spotlight. All these elements—drug and people traffickers, gun runners, the Mujahideen—morphed into this milieu. The government of Pakistan played its part there, I mean, that’s no secret. They made a very clear, conscious choice, using the training camps that we had all used to train the Mujahideen. One forgets. We don’t remember as well as the Pakistanis what was going on then. Pakistanis remind us. Hekmatyar, Massoud, the Haqqanis were all part of this Mujahideen movement and it was important that it be covert. The Pakistan Army was very critical to that whole effort. The problem was that they got a little carried away. Afghanistan is not going back to that. It will fall back a bit and there won’t be as much money there as there is now, but we’ll certainly meet our commitment to its security forces and to a robust civilian setup. Pakistan has its own internal-security challenges and contradictions and the results of the 30 years of fighting in Afghanistan are real to this country. It’s often used as an excuse, but there’s a certain element of truth to that. Pakistan got behind and it needs to catch up and make use of its potential. We’re committed to helping it get there. We’ve learned a lot in the last five years about how to be effective and that’s what we tell our Congress, that it is money well spent.