Home Lightbox Perfidy of the Son-in-Law

Perfidy of the Son-in-Law 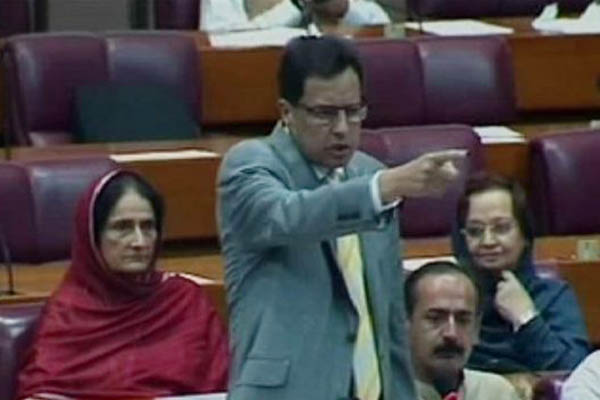 What was Muhammad Safdar Awan’s motivation for attacking the persecuted Ahmadi community?

On Oct. 10, Pakistan played witness to a curious theater of the absurd. Former military captain Muhammad Safdar Awan of the ruling PMLN attacked Pakistan’s persecuted Ahmadi community in Parliament, ostensibly to further the debate over a Khatm-e-Nabuwwat reference in the Election Bill 2017. The son-in-law of ousted premier Nawaz Sharif, who has faced the wrath of the clergy for his pro-minority statements, Safdar’s rhetoric stunned the House, with observers interpreting the outburst as a sign of a growing rift within the Sharif clan. Interior Minister Ahsan Iqbal’s condemnation—two days later—on Twitter appeared to bolster this view.

Safdar’s charges were extravagant, some appearing to directly target his father-in-law and leader of the PMLN. During his tirade, he slammed a decision to rename the Quaid-e-Azam University’s Physics Center after “Ahmadi” Nobel Prizewinner Dr. Abdus Salam—despite his father-in-law approving it last year against the Council of Islamic Ideology’s objections. He also railed against the presumed appointment of Ahmadis in civil and military jobs, accusing the entire community of being disloyal Pakistanis. Not satisfied with merely attacking the marginalized, Safdar exited Parliament shouting slogans in favor of Mumtaz Qadri, the police commando who was hanged in 2016 for assassinating then-Punjab governor Salmaan Taseer.

Was it a moron’s defense against the charges of corruption he faces before NAB? Or was it a dumb attempt to separate himself from a “criminal” family he believes will soon be behind bars? Perhaps even he doesn’t know.

Safdar has long been a liability for the PMLN due to his—increasingly apparent—low IQ and tendency to deviate from party policy and fly off the handle. His party membership was even briefly suspended in 2012 after he caused rifts in the party’s Khyber-Pakhtunkhwa leadership.

How will Nawaz Sharif react to his latest outburst? And how will Safdar’s wife, Maryam Nawaz, accept this act of stabbing her father in the back if she doesn’t already despise her husband for being such an ass? For troubled Maryam, it might finally be time to make one of the most important decisions of her life.

You are a beacon in an otherwise bleak, dogma ridden and tyranny smitten superstitious region which never tires of inventing its own “truths” so aptly characterized by a Trump devotee as “ALTERNATIVE FACT”.