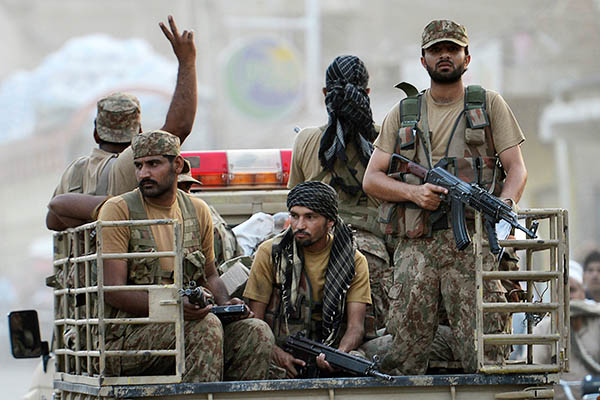 Choosing between the doable and the desirable.

Operation Zarb-e Azb is on. Prime Minister Nawaz Sharif says the country has embarked on a decisive battle against terrorism. In a press briefing, the military spokesman was reported as saying much the same.

First, as I have often written, we have entered an era of perpetual conflict. That denotes a long, simmering war with its crescendos and diminuendos, long spells of conflict interspersed with interregnums of faux peace.

Second, the perpetuity of conflict does not mean a single, linear war. Its nature is and will be non-linear both in terms of its various battles as well as the means employed by state and non-state actors to wage it. Innovations, new technologies, new measures and new countermeasures will be the hallmark of this conflict. Battles will be fought in physical and virtual spaces and its zone will not be confined in spatio-temporal terms, cut as it will across national boundaries.

Third, its spread will rely on and employ the same tools of globalization which is underpinned by the communications revolution and which has provided us with gadgets that we seem to think have made our lives so much better. That’s the paradox. The world, if it is flat, is flat not just for doing legit business but also for generating violence.

Fourth, the cost of war will continue to come down for non-state actors and increase exponentially for state actors. The reasons for that are many but beyond the scope of this piece. A good indicator, however, is a rough estimate of what Al Qaeda and its affiliated groups have spent in the last 13 years versus what the U.S.-led coalition has for the same period. [NB: to keep the exercise simple, we may take just the direct cost for this period.]

Fifth, to quote Crow, the alter ego of Kafka Tamura in Haruki Murakami’s novel Kafka on the Shore, no war in this conflict will end all wars. This war will be a “perfect, self-contained being.” That is truer of this conflict than it was at the end of WWI when, fired by Wilsonian idealism, the victors created the League of Nations, a body that was supposed to maintain world peace.

Sartre’s argument in the foreword to Frantz Fanon’s The Wretched of the Earth that “violence, like Achilles’ lance, heals the wounds that it has inflicted” will be nullified even as it will continue to inform the activities of those who find the current global architecture untenable, anathematic and, therefore, unacceptable.

Sixth, the effort by actors, state and non-state, to challenge the current order at the global and regional levels will continue to beget a response from super- and middle-sized powers which will be high on addressing the immediate problem and low on strategies addressed to get to the root of the ressentiment. The irony is that the responses, instead of resolving the conflict, will help sustain and fuel it.

Seventh, the idea which fired the sans–culottes of the French Revolution, now fully informs conflicts. People are prepared to die for an idea, an abstraction, whether man-made or ethereal. Whether one describes it as the Hegelian self-consciousnesses fighting for recognition or Camus’ rebel deciding in that moment to settle for “all or nothing”, ideas, transforming themselves in ideologies, will be the drivers of this conflict.

Eighth, the conflict will be multi-faceted: state versus non-state actors (this will take the shape of civil wars within states and wars across state boundaries); states versus states (the rise of Russia and China will likely pit the ‘western’ bloc against Moscow and Beijing in the classic state-war paradigm); in our region, the so-called greater Middle East, there will be a war within Islam, more ferocious along sectarian-denominational lines before it turns into a war of Islam against the West.

Ninth, as the conflict rages within Islam, the realist paradigm will force the hand of the West to perpetuate it. The logic is old. To prevent Islamist groups from becoming a threat for the West, keep the pot boiling: help regimes just enough to ensure they don’t fall to the Islamist onslaught. The irony is that the Islamists point to the conflict as a conspiracy by the West, even as the conflict is rooted in the history of Islam. It is precisely that which is going to fulfil this prophecy. I call it the Cardinal Richelieu strategy.

Tenth, even as states try to cooperate more closely to develop joint strategies against non-state actors, the protean nature of the conflict will also continue to pull them apart as travel, and with it the movement of the people, gets restricted. There will be constant tension between enhancing security through cooperation and constraints put in place precisely because of security concerns. At a secondary level, similar tension will inform state and societal relations. The states, in trying to make themselves secure in the name of the people, will adopt strategies and take measures that will steadily erode individual liberties. That process is already well underway. It will be interesting to watch when this tension reaches critical mass.

This quick checklist is not exhaustive at all. It is difficult to chart with precision the nature of this conflict or even its timeline. But it should be clear that all of the above is either already happening or what’s happening in the present is creating an enabling environment for what is likely to come and which can be visualised in broad, if not precise terms.

The Pakistani state is not operating in a vacuum. In fact, it sits right in the belly of this beast. It has to take into consideration not just the threat from non-state actors operating across national boundaries but also be cognisant of what these ideological actors can do to pit it against state actors in the region and beyond.

It is in the backdrop of what’s happening within the region and beyond that one must reject the formulation that the operation in North Waziristan is some final battle which will lead us out of the current mess. We are in a state of flux and the advance of technologies coupled with ideas and ideologies will determine the nature of this conflict and its many dimensions in ways that cannot be entirely predicted.

Another important aspect of this state of perpetual conflict is that just like it has no separate zones of war and peace, nor is there a clear, Clausewitzean definition of victory and defeat. The enemy is protean in nature, changing and multiplying constantly even as it does not need great numbers of fighters or even big coffers. It just needs to hold on and win psychological and ideological victories. Put another way, it can keep losing the battles and yet win the war.

This works to the advantage of non-state actors until they remain non-state and elusive. Where and when they actually defeat a state and become a state, they will face the same asymmetric disadvantage which helped them dislodge one order. The paradox is deliciously ironic.

In a nutshell, Pakistanis, as also much of the world, should forget about returning to some idyllic state of innocence. It’s gone, interred, flesh and bones.

Corollary: once we appreciate the nature of this conflict, the parameters of our debate will also change dramatically. Those who ask the question of when this war will end and what must be done—talking or fighting—to end it, will be cured of the fantasy that it can be ended in the way conventional, inter-state wars can be culminated through victory and defeat.

Given the interminable nature of this conflict, am I suggesting inaction?

No. While knowledge does kill action, the necessity to survive breeds it. The point is not to suggest that nothing can be done but to induce an understanding of what can be done and what must be expected. In other words, to ensure that we do not mix our wish-postulates with reality. It’s important to do the doable rather than wait for and desire the desirable. The discrepancy between the two will continue to grow anyway.

The North Waziristan operation is important. It will help in some ways but not in others. It’s a battle. Winning it will not win the war for us. That requires much more. And the much more is a long haul.

These cowards who behead other people need to be eliminated from this earth. They cannot fight and win a war so they pick people off one at a time. Twelve of them against one. Outraged American. My hope is that we will wake up one morning to find that our troops have squashed these little flees upon humanity off the face of the earth along with those who help or harbour them.

Brilliant piece… more so in hindsight (for me).