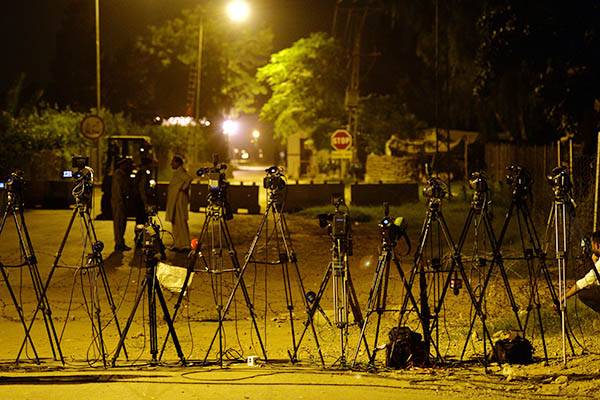 Former president placed under house arrest again hours after he was granted bail allowing him to leave the country.

Police said Thursday they had arrested former president Pervez Musharraf over the 2007 raid of the Lal Masjid in Islamabad, a day after a court granted him bail in a separate case.

“We have put Gen. Musharraf under house arrest in a case involving a military operation on an Islamabad mosque,” Muhammad Rizwan, a senior official of the Islamabad police told reporters. “We will present him before a court on Friday,” Rizwan added, after visiting Musharraf’s house at the edge of Islamabad, which has been declared a sub-jail.

The Supreme Court on Wednesday granted bail to Musharraf over the death of rebel leader Akbar Bugti, a move that would have seen him freed after nearly six months of house arrest once the release procedures were completed. He had already been granted bail in two other major cases against him, including one relating to the assassination of former prime minister Benazir Bhutto.

Police had refused a request by leaders of the radical Lal Masjid to name Gen. Musharraf as a suspect in the case of the military raid in 2007, which saw dozens killed, including one of the administrators. But the Islamabad High Court, acting on a petition by the son of the administrator, issued instructions to city police to nominate him in the case, paving the way for Thursday’s arrest.

Musharraf returned to Pakistan in March to run in the general elections, vowing to save the country from economic collapse and militancy. But he was barred from standing in the election, won convincingly by Prime Minister Nawaz Sharif, and was hit with a barrage of criminal cases dating back to his rule.

Taking the former chief of army staff into custody was an unprecedented move in a country ruled for more than half of its life by the military. It was seen by many as a challenge to the power of the armed forces.

Security remained tight at Musharraf’s house, declared a sub-jail under the auspices of the Adiala prison in Rawalpindi. Some 300 policemen, paramilitaries and marksmen guard him due to persistent Taliban threats to kill him over his role in allying Pakistan with Washington in the U.S.-led war on terror following the 9/11 attacks.

Since Sharif won the election there have been repeated rumors that a deal would be reached to allow Musharraf to leave Pakistan before his trials were completed. One theory was that Musharraf might be allowed to visit his sick, elderly mother in Dubai on compassionate grounds.

“We hope he will get bail in this new case also very soon. He will leave his house only when he will go to fly abroad, otherwise he will stay there even after being released in all cases,” Amjad said.

Analysts say that Musharraf wants his name cleared of all cases registered against him and to go abroad as a man free of all charges.

Oh dear… this man’s goose is cooked!!! Let us see if Musharraf is going to reveal the names of the foreign powers who twisted his arm and assisted him to take action on the presumption that US’s most wanted OBL was hiding in Lal Masjid!!! No wonder Nawaz Sharif is just not taking any action against any organisations and focussing on Business,Metros and Bullet trains!!! This way at least he will shift a lot of SIRIYA & STEEL from his foundries and make healthy profits!!! Law & order and peace in the streets does not affect him and the parliamentarians… Why should they involve themselves in such issues!!!
Pakistan’s leadership is very confused indeed. But a clear script and instructions from abroad is paving the way for them. They will carry on PARROT FASHION.