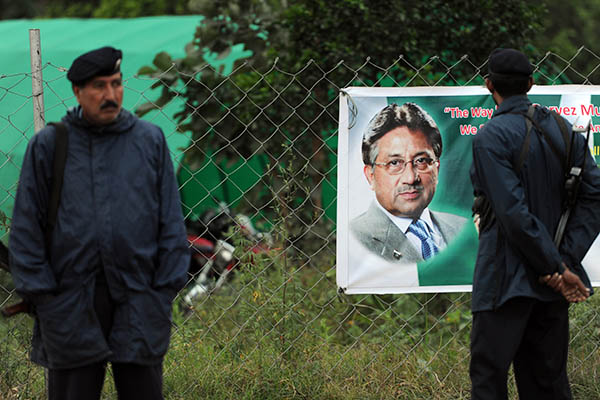 Adiala Jail withdraws prison staff that was deployed at former president’s house while it was a sub-jail.

Pakistan formally freed former ruler Pervez Musharraf from house arrest on Thursday after a court granted him bail in the last criminal case against him.

But the retired general remains under heavy guard in his house on the edge of Islamabad because of serious threats to his life.

The Taliban have threatened to kill Musharraf, who as president allied Pakistan with Washington in the U.S. “war on terror” in the wake of the 9/11 attacks.

An Islamabad district court on Monday gave the 70-year-old bail over a deadly raid on the capital’s Lal Masjid in 2007, the last of the cases against him dating back to his 1999-2008 rule.

Prison staff left the house, which had been declared a “sub-jail,” on Friday after Musharraf’s legal team submitted bail bonds totaling Rs. 200,000.

“We received written orders from Islamabad city administration this morning and we have called back the prison officials deployed at his house,” said Malik Mushtaq, the superintendent of Rawalpindi’s Adiala Jail.

Jawad Paul, the head of Islamabad local administration, confirmed the news. “Musharraf is a free man now, his house is no more a sub prison,” he said.

Musharraf returned to Pakistan in March after years of self-imposed exile to run in the May general elections, vowing to “save” the country from economic collapse and militancy.

But he was barred from contesting the poll, and was hit with a series of criminal cases dating back to his rule. Musharraf has faced charges over former prime minister Benazir Bhutto’s murder at an election rally in 2007, the death of a Baloch rebel leader in 2006 and the detention of judges in 2007.

He was put under house arrest in April but there have been persistent rumors in recent months that a deal would be reached for Musharraf to leave Pakistan to avoid the embarrassment of a former Army chief being tried in a civilian court.

But his lawyer Afshan Adil said Musharraf would fight the cases against him and planned to remain in Islamabad for the time being.