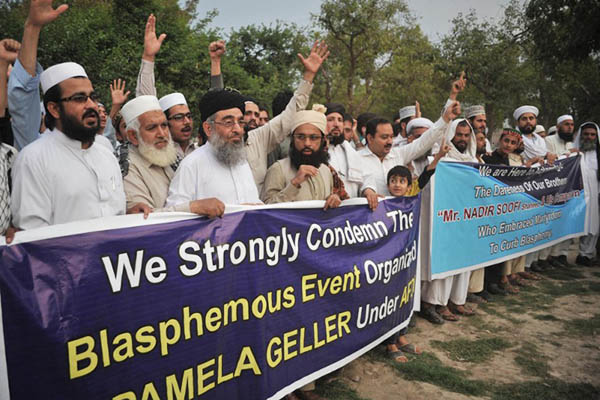 Residents of Peshawar rallied on Tuesday against Pamela Geller and offered funeral prayers in absentia for the gunmen who opened fire on a Texas exhibit of caricatures featuring Islam’s Prophet.

Around 80 people, led by local religious scholar Peer Muhammad Chishti, gathered to offer funeral prayers for Nadir Soofi, 34, and Elton Simpson, 31. “We are proud of our brothers,” said Chishti. “We didn’t know them and never met them, but their brave actions forced the authorities to stop the exhibit,” he said. “We are here to pay tribute to them,” he added.

Police said the two gunmen targeted the controversial cartoon contest, and opened fire with assault rifles, hitting a security guard in the ankle. A police officer then shot and killed both men.

Soofi reportedly graduated from the International School of Islamabad in 1998, and attended the University of Utah. A cousin told local media, however, that he was born in the United States. The Islamic State militant group has claimed responsibility for the attack, but the U.S. says it has not yet found any links between the attackers and the extremists.

Chishti, who had also led funeral prayers for Charlie Hebdo attackers Said and Cherif Kouachi, said Soofi and Simpson weren’t just “ordinary” martyrs, but were “special” because of their “kindness to the Muslim community.”

Following the prayers, the participants rallied against the U.S. and condemned the American Freedom Defense Initiative, which organized the blasphemous cartoons event. “We are here to acknowledge the courage of our brothers Nadir Soofi ‘Shaheed’ and his companion who embraced martyrdom,” they chanted, while also wielding placards. “We strongly condemn the blasphemous event organized by Pamela Geller under AFDI,” read one banner.

The protesters ended the rally by placing bouquets for the deceased gunmen to pay tribute to them.

i also pay tribute to tow men’s and salute peer Muhammad chishti sab who offer prayer for them & “We strongly condemn the blasphemous event organized by Pamela Geller under AFDI,”

Non muslims dont understand simply how sensitive issue is this to muslims and they come back again and again with stupid reason of freedom of expression..
do i have enough freedom to pass racial comments in front of obama or lets make a contest to make fun of Obama..
in india no one allow to make fun of their president, korean japanes australian israelies any nation wont let make fun of anyof their important person ..
is this how for NON Muslims to understand Prophet Mohammad (peace be upon him) is far far more important to muslims than any Vvip person in this world alive or dead.
inthe name of freedom of expression they are just provoking muslims.