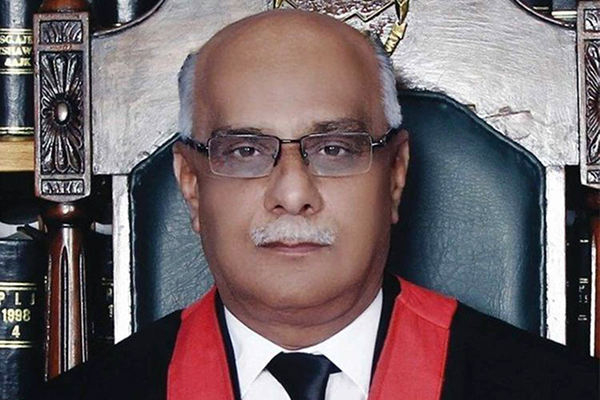 A wife and a daughter survive the 59-year-old judge

Peshawar High Court Chief Justice Waqar Ahmed Seth died on Thursday night due to complications related to the novel coronavirus, a spokesperson for the court has confirmed. He was 59.

Justice Seth tested positive for COVID-19 on Oct. 22 and had been under treatment at hospital in Peshawar. As his condition worsened, he was shifted to Kulsoom International Hospital in Islamabad where he succumbed to the deadly illness, the spokesperson added.

His funeral prayers will be offered in Peshawar today (Friday) at 2:30 p.m. A wife and daughter survive him.

Justice Seth became a household name in Pakistan over his observations in the high treason verdict against military dictator Gen. (retd.) Pervez Musharraf.

A special court sentenced Musharraf to death under Article 6 of the Constitution on Dec. 17, 2019. In the detailed verdict, Justice Seth wrote that law enforcement agencies should apprehend the convict and ensure the death penalty was applied as per law. Controversially, he added, “if found dead, his corpse be dragged to the D-Chowk, Islamabad, Pakistan, and be hanged for 3 days.”

The observation drew outrage from both the incumbent government and the military brass, with Law Minister Farogh Naseem saying the federal government would file a reference against Justice Seth under Article 209 of the Constitution in the Supreme Judicial Council. The matter was rendered moot less than a month later when the Lahore High Court quashed the high treason verdict, ruling the formation of the special court unconstitutional.

Justice Seth also presided over several high-profile cases, including the acquittal of 74 convicts of military courts, most of whom were awarded death sentences.

Prime Minister Imran Khan, in a posting on Twitter, expressed his condolences for the death of the top judge. “Saddened to learn of the passing of Chief Justice Peshawar High Court Waqar Ahmed Seth. May his soul rest in peace—Ameen. My condolences and prayers go to his family,” he said.

Similarly, Chief of Army Staff Gen. Qamar Javed Bajwa expressed grief over the death of Justice Seth. “May Allah bless his soul and give strength to the bereaved family to bear this irreparable loss, Ameen,” the Inter-Services Public Relations cited him as saying.

Chief Justice of Pakistan Gulzar Ahmed and other judges of the apex court also expressed deep sorrow and grief over the sad demise and extended their condolences to members of the bereaved family.

Pakistan Muslim League (Nawaz) Vice-President Maryam Nawaz also hailed the deceased as a hero. “You will be alive in history and remembered as a hero. May you rest in eternal peace. Ameen,” she wrote on Twitter.