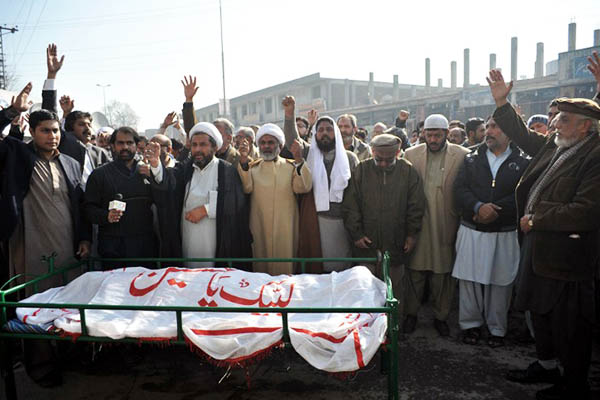 There are still 40 people being treated for injuries at various hospitals in the city.

The death toll in a militant attack on a Shia mosque in Peshawar rose to 21 after an injured person died of his wounds, officials said on Saturday.

Three heavily armed Taliban militants stormed the Imamia mosque with grenades, Kalashnikovs and explosive suicide vests in Peshawar around the time of the main Friday prayers.

“The death toll has now risen to 21,” said senior local police official Mian Saeed. An official at the Hayatabad Medical Complex, Tauheed Zulfiqar also confirmed the new toll and said the injured person, who was in the intensive care unit, had died of his wounds early Saturday morning.

“Around 40 injured people are still under treatment in different hospitals,” Zulfiqar added.

The attack came two weeks after a suicide bombing at a Shia mosque in Sindh killed 61 people, the deadliest sectarian incident to hit the country in nearly two years.

The Tehreek-e-Taliban Pakistan (TTP) claimed responsibility for Friday’s attack in an email statement, saying it was revenge for a militant known as Dr. Usman, who was hanged in December.

Islamabad has stepped up its fight against militants since Taliban gunmen massacred more than 150 people, most of them children, at a school in Peshawar in December. Following the massacre, Prime Minister Nawaz Sharif ended a six-year moratorium on the death penalty and Dr. Usman, also known as Aqeel, was one of the first to go to the gallows.

He was convicted for an attack on the Army headquarters in Rawalpindi in 2009 and was arrested after being injured.

Anti-Shia attacks have been increasing in recent years in Karachi, Quetta, the northwestern area of Parachinar and the far-northeastern town of Gilgit.