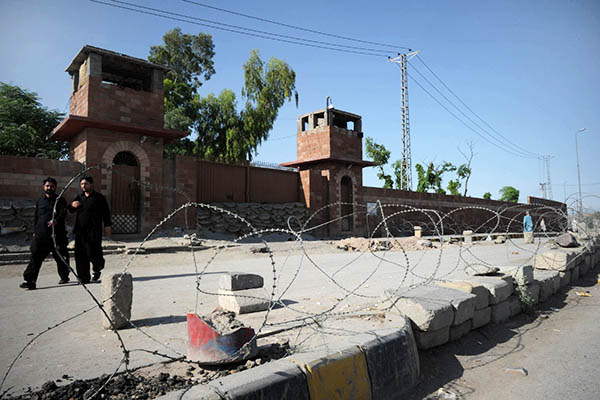 The Peshawar Central Jail. A. Majeed—AFP

Security official claims federal government has refused to accept request to transfer Shakeel Afridi despite Taliban threatening to attack and kill him.

The Peshawar Central Jail is under serious militant threat due to the presence of Dr. Shakeel Afridi and his alleged links to the CIA program that found Osama bin Laden in Pakistan, according to an official.

“The militants have openly threatened to attack the jail and kill Dr. Afridi,” said the official on condition of anonymity as he is not authorized to speak to media. “The Khyber-Pakhtunkhwa government has, several times, requested the federal government to transfer him to Adiala Jail in Rawalpindi as it too risky to keep him in Peshawar,” said another official, also speaking on condition of anonymity. However, the official said, the government had yet to respond to the requests. “The federal government never replied to us, and the threat has become far more serious following the launch of Operation Zarb-e-Azb in North Waziristan,” he added.

“Peshawar is surrounded by the tribal areas from three sides and everyone knows the Pakistani Taliban enter the city from their hideouts in the tribal areas to stage their attacks,” he said. “They [militants] are seeking custody of Dr. Afridi for his alleged support to the CIA. The federal government will be liable if they attack the jail now,” he added.

To a question on whether security arrangements at the Peshawar jail were insufficient, the security official said the task had become much more difficult after the launch of the military operation in North Waziristan. “They [militants] attacked the central jails in Bannu and Dera Ismail Khan, freeing hundreds of their colleagues, including 12 ‘most wanted’ Taliban commanders,” he said. “We are trying our best to provide foolproof security, but the task is not easy, as the jail is located within the city limits, and we cannot ban all civilian movement in the area.”

Afridi was arrested after U.S. troops killed bin Laden in May 2011 in Abbottabad. Islamabad branded the raid a violation of sovereignty, and relations with the U.S. fell to an all-time low. The CIA recruited the doctor to run a vaccination program in the hope of obtaining DNA samples to help identify bin Laden, although medics never managed to gain access to the family. Afridi was convicted not for working for the CIA, for which the court said it had no jurisdiction, but for alleged ties to militants. He has been incarcerated in the Peshawar Central Jail since May 2012.