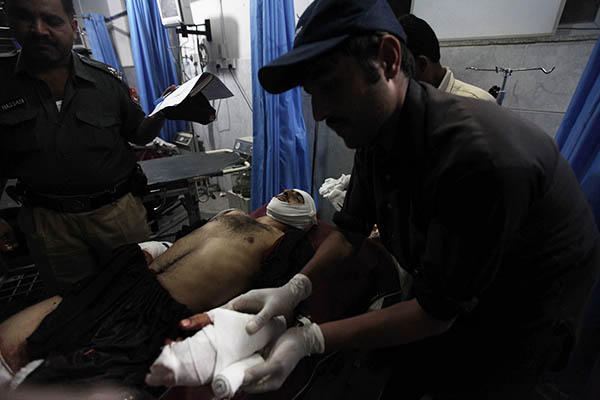 At least five people killed and two others wounded in separate assaults.

At least five people were killed and two others wounded on Friday following two attacks in Peshawar that targeted police personnel, officials said.

Three officers and a civilian were killed when gunmen opened fire on their van as they dined at a restaurant. “The policemen were breaking their fast at a local restaurant at Landi Akhun Ahmed neighborhood on the outskirts of the city when unknown assailants opened indiscriminate firing on their van killing three policemen and a waiter of the restaurant on the spot,” said senior police official Muhammad Faisal. He said two other policemen were injured, adding that they are out of danger.

Nobody has claimed responsibility for the incident but the Pakistani Taliban (TTP) have been wedging an ongoing war against the state.

Earlier in the morning, a police van was blown up with an improvised explosive device (IED) at the center of the city, killing one police official.

Pakistan launched a long-awaited operation in North Waziristan last month aimed at eliminating Taliban and other militant bases. More than 800,000 people have been forced to flee from North Waziristan by the offensive. Analysts have warned that the operation would likely lead to reprisal attacks in Pakistan’s major cities at the hands of sleeper cells of militant outfits linked to the Taliban.

“This is [almost] definitely in reaction to the ongoing military operation,” said Faisal. “Peshawar police has been on the terrorists’ hit list for a while, and several policemen including senior officers, have been targeted in various attacks,” he added. “Such attacks will not demoralize us and we will face terrorists and arrest or kill them.”