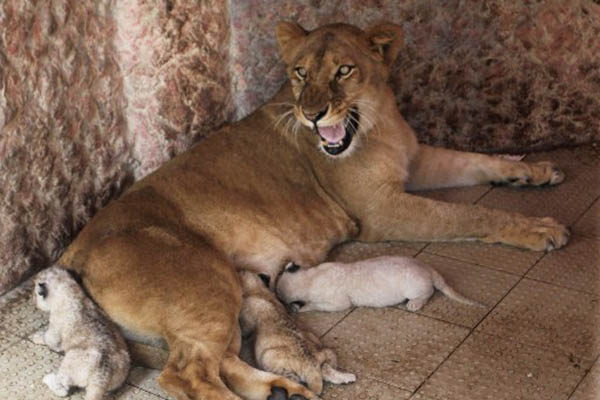 Animal enthusiast in Multan owns nine lions, houses at a mini-zoo built on his property.

An animal enthusiast in Pakistan is celebrating a roaring success after his pet lioness Rani gave birth to five healthy cubs.

The new arrivals plus another two cubs born nine months ago mean Fazal Abbas Mahi has a total of nine lions at his home in Multan. But if the thought of so many big cats roaming round a house gives paws for thought, worry not, the lions live in a specially built mini-zoo in the grounds of Mahi’s residence.

Wealthy landowner Mahi told AFP he acquired Rani as a one-year-old in 2011 to join Raja, whom he bought from a friend a few years earlier.

“I am fond of animals and birds since my childhood and I also have horses, ponies and peacocks. I also have vintage cars,” he said, adding that he has a permit for the lions from the wildlife department.

The new cubs are still romping around their pen fuelled by mum’s milk, but feeding the rest of the pride is no picnic—the hungry felines chomp their way through around 20 kilograms of meat a day.

Lions appeared all over Pakistan in early 2013—at least in toy form, as the election symbol of the Pakistan Muslim League-N party that won power for Prime Minister Nawaz Sharif. Sharif, who is nicknamed by supporters the “Lion of Punjab,” has two stuffed male lions in his palatial residence outside Lahore.