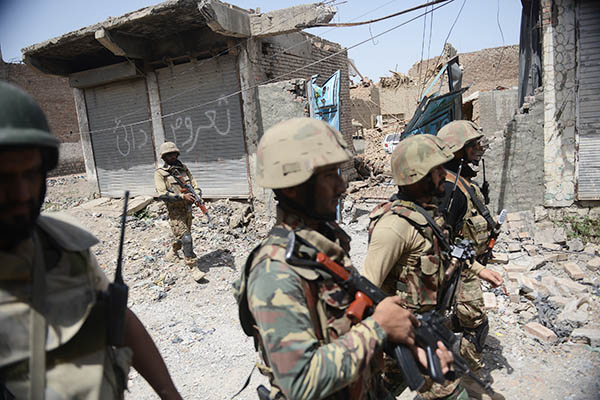 Military spokesman says Operation Zarb-e-Azb is proceeding as planned, but admits that many terrorists have fled to Afghanistan.

The first phase of a military operation that targeted militants based in North Waziristan is now complete, according to a spokesman for Pakistan’s armed forces.

“By the grace of God, the first phase of the operation has been completed,” said Maj. Gen. Asim Bajwa, the director general of ISPR, the public relations arm of the armed forces. Addressing journalists during a briefing in Miranshah, he said that over 400 militants, including Uzbek and Turkish fighters, had been killed in Operation Zarb-e-Azb since it launched on June 15. He said Miranshah was now under military control, adding that 80 percent of the region had been cleared of militants and their hideouts.

“The armed forces took control of 11 factories used to manufacture land mines,” said Bajwa. “We have also recovered 23 tons of explosives from various parts of North Waziristan in the ongoing search operation,” he added. According to the ISPR spokesman, aerial shelling has destroyed over 100 militant hideouts.

To a question, Bajwa admitted that many terrorists had fled the region before the operation could begin. “There are some initial reports that terrorists of the Tehreek-e-Taliban Pakistan, and several foreign nationals, fled to Afghanistan prior to the launch of the operation,” he said.

Local and intelligence sources had told Newsweek last week that Qari Shakeel, a senior member of the TTP’s ruling shura, had fled to Afghanistan two weeks prior to the launch of the military operation. They also claimed that Shahidullah Shahid, the spokesman for the TTP, was the last terrorist to leave North Waziristan, claiming he had fled to Orakzai Agency a week before Operation Zarb-e-Azb started.

According to local tribesmen, who spoke to Newsweek on condition of anonymity, over 6,000 armed Uzbek and Turkish fighters used to patrol Miranshah prior to the operation. They claimed that these men had disappeared as soon as the government announced it was launching the military operation.

If the aim was to kill just 400 out of the 10,000 terrorists there then whats the point of this huge exercise which incurred a big financial and human cost?