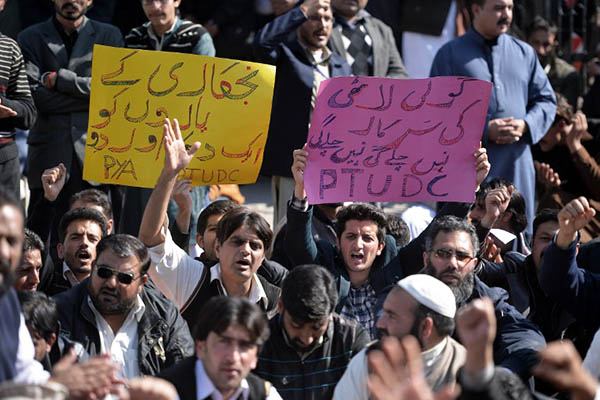 Spokesman for national flag carrier says arrangements have been made with rival airlines to accommodate affected travelers.

Major airports across Pakistan remained crippled by an ongoing workers’ strike on Friday as employees of the national flag carrier continued to protest plans to privatize the airline on their fourth day.

All of Pakistan International Airlines’ foreign and domestic flights were suspended Friday with thousands of passengers, including Pakistani domestic workers trying to fly to the Middle East, stranded at Karachi’s international airport and other key hubs.

“My visa is about to expire in the next three days and I have to reach Dubai before that but here I am stuck at the airport,” said Sualma Jia, who works at a hotel in Dubai, in Karachi. She said she was not even able to retrieve her luggage from the airline.

“My future is at stake here, I tried a few private airlines but they have raised their fares by almost three times,” she said.

PIA spokesman Danial Hassan Gillani said agreements had been reached with rival airlines to fly all domestic and international passengers, including dozens of pilgrims heading for Saudi Arabia who held a protest after their flight was cancelled. However, passengers must pay any price increase and the backlog is expected to take days to clear, with no end in sight to the industrial action.

Earlier this week, two protesting airline employees were shot dead and several more wounded at Karachi’s international airport when clashes broke out between security forces and staff, though authorities denied opening fire. The strike continues despite Prime Minister Nawaz Sharif’s warning the demonstration was illegal and those taking part could face up to a year in prison under a law that restricts union activity in state-administered sectors.

In December, Islamabad announced it would complete the partial sale of the carrier by July, following years of crushing losses and mismanagement that have battered the airline’s reputation.