Home Opinion Pick a Side 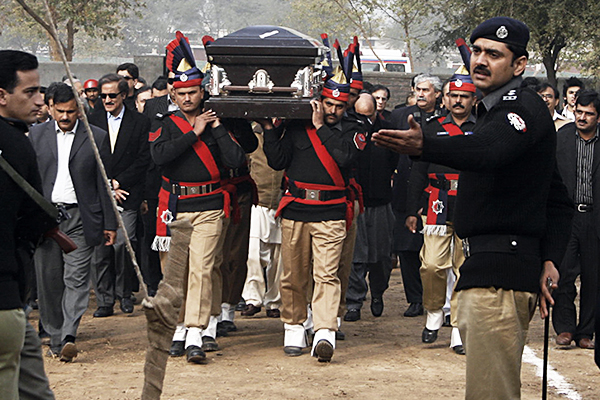 Blasphemy in Pakistan lies in the eye of the beholder. Unfortunately, in the world’s most dangerous country, 20/20 vision is scarce.

Efforts to correct this enduring myopia have led to yet another man—Punjab Gov. Salmaan Taseer—paying the ultimate price for his beliefs. Yet there are still those who refuse to acknowledge the significance of his sacrifice. The progressive liberals have rallied around the killing of one of their own. Everyone else has either condoned the murder or outright celebrated the assassin, Mumtaz Qadri, as the torchbearer of “Islamic” values. With three courageous exceptions (Bilawal Bhutto Zardari, Sherry Rehman, and Shahbaz Bhatti), Taseer’s ruling party comrades appear to see Jan. 4 only as a political inconvenience.

The religious right has never hidden what it is they stand for. Their propaganda and virulent rhetoric casts those persecuted by discriminatory laws, and their defenders, as apostates who must be tried and punished by the hatred of men rather than the justice of a fair court. Pakistan cannot be saved from equivocation and hypocritical fence-sitting. The expression of courage should not be reserved for quaint dinner conversations alone.

We cannot rationalize the ills of our country by pointing to misdemeanors in the West. We cannot brush aside the assault on freedom of speech in Pakistan by citing the criminalization of Holocaust denial as an analogous example in the West. We cannot justify the reward announced for Taseer’s head by referencing a U.S. analyst’s suggestion that Julian Assange of WikiLeaks be killed. The middle-grounders who think this is a battle between the forces of liberal and “religious” values couldn’t be more wrong. This is a war between right and wrong, and silence only tips the scales in favor of the latter.

There are those who hold Taseer responsible for the tragedy. Is the victim really to blame? After last summer’s blasphemous Facebook campaign and the Danish cartoons, Taseer should have known how on edge Pakistanis were, says a top lawyer based in Lahore requesting anonymity. Pakistanis believe Islam is under threat, she says. And by seeking a presidential pardon for Aasia Noreen, a Christian woman convicted of blasphemy by a lower court, Taseer demonstrated his preference for political expediency rather than due process.

Taseer was aware of Pakistan’s legal history relating to cases of alleged blasphemy. He knew Noreen’s conviction would likely be overturned by a superior court because of lack of evidence. But that was not the point. Like others, including former cricketer turned politician Imran Khan, Taseer believed the blasphemy laws were open to misuse and needed to be amended to protect the poorest of Pakistan being victimized by them. Taseer broke no law. He did not blaspheme against Islam or Islam’s Prophet. Yet, some “moderate” critics allege Taseer endangered Christians by coming out so aggressively in Noreen’s support and stilled any impulse to quietly rectify the laws.

The slain governor was not a recent convert to the cause of safeguarding the rights of the dispossessed and protecting them from abuse. When the Ahmadis were attacked and 86 of them killed in Lahore last May, Taseer went to the crime scenes and visited with survivors in hospital while other politicians maintained a safe distance, unwilling to be seen commiserating with fellow Pakistanis who had been declared apostates by Zulfikar Ali Bhutto’s government in the 1970s. He was equally distressed about the Gojra massacre in 2009 perpetrated against the Christian community by Islamist mobs operating under the belief that one of them had desecrated the Quran. Taseer was a compassionate man. His unreserved support for the rights, safety and security of others was not political expediency. If he had chosen to go that route, he knew it would have been far safer—and politically profitable—to mum up in the face of Islamist rampage and cruelty.

But for Rehman, Bhatti, Khan, former prime minister Chaudhry Shujaat Hussain, Pakistan’s religious minorities, and a room’s worth of rights activists, no one else is willing to take up Taseer’s fight. This is hardly surprising given that the right to question a law entrenched by an Islamist dictator has the potential to endanger the lives of those who exercise it—from a Christian farmhand to the governor of the country’s largest province. Some may not yet see it, but Jan. 4 changed everything. It is time to pick a side.

That time is past.