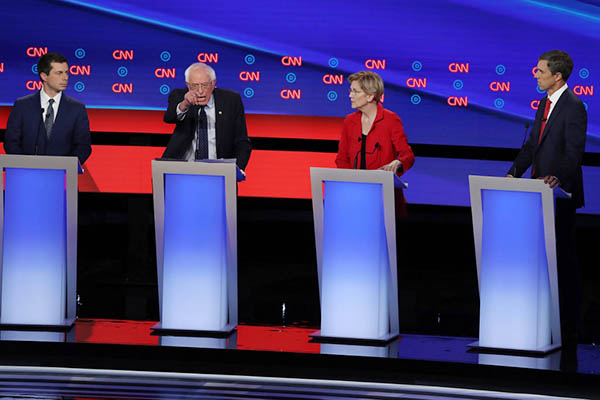 The ideological divide between Democratic presidential hopefuls came into focus on Tuesday as leading progressive candidates Bernie Sanders and Elizabeth Warren defended their liberal policies on healthcare and immigration against surprisingly energetic attacks from moderate rivals.

Warren demanded “big, structural change” and warned that political “spinelessness” over radical reforms will perpetuate a “rigged system that has helped the wealthy and well-connected and kicked dirt in the faces of everyone else.” But she and Sanders faced dramatic pushback including from ex-congressman John Delaney who delivered a scathing rebuke to their “fairy tale economics” that risk bankrupting the economy.

Sanders and Warren, Delaney said in the most visible moment of his candidacy, are peddling “bad policies like Medicare for All, free everything, and impossible promises that will turn off independent voters and get Trump re-elected.”

Tuesday marked the most sustained assault yet by centrists on the progressives’ big-idea platforms.

The stakes are sky-high. The debate is likely to winnow the sprawling field by as much as half, ahead of the next one in September.

Underperformers like Senator Amy Klobuchar and Colorado ex-governor John Hickenlooper, both polling at below two percent, scrambled for breakout moments to keep their struggling campaigns alive. “I have bold ideas, but they are grounded in reality,” asserted Klobuchar.

Warren and Sanders—who are essentially tied for second, at about half Biden’s support—share similar political platforms: both back universal healthcare, tuition-free public college, tax hikes on wealthy Americans and aggressive Wall Street regulation. They parried attacks throughout the two-and-a-half-hour debate that touched on everything from jobs and foreign policy to gun violence, taxes and how old is too old to be president.

“I don’t care how old you are. I care about your vision,” South Bend, Indiana Mayor Pete Buttigieg, 37, said of 77-year-old Sanders. The veteran senator from Vermont offered a staunch defense of his Medicare for All plan, at one point shutting down criticism that he did not know whether it would provide better coverage than policies offered through labor unions. “I do, I wrote the damn bill,” he steamed.

Divisions also emerged on immigration and trade. Warren’s plan to decriminalize border crossings by undocumented migrants brought an animated response from Montana Governor Steve Bullock, who warned that would only exacerbate problems. “A sane immigration system needs a sane leader, and we can do that without decriminalizing” such crossings, said Bullock, who told viewers his mission was to “win back the places we lost” to Trump in 2016.

With moderate rivals savaging ambitious but costly liberal policies, Warren lost her patience. “I don’t understand why anybody goes to all the trouble of running for president of the United States to talk about what we really can’t do and shouldn’t fight for,” she said, in one of the night’s biggest applause lines.

The 10 candidates unified against Trump’s combative and controversial presidency. “We’ll call his racism out for what it is,” said Beto O’Rourke, an ex-congressman seeking to thread the needle between the moderate and liberal camps.

Buttigieg, a military veteran, largely remained above the fray. But he attacked the “incompetence” of Trump’s immigration crisis, and assailed Republicans who have stood silent despite the president’s rhetoric on race. “When the sun sets on your career… the thing you will be remembered for is whether in this moment, this president, you had the courage to stand up to him,” Buttigieg said.

Trump’s disparaging comments this week about Baltimore and an African-American member of Congress has intensified talk about the country’s racial divide.

Several candidates pointed to the need to inspire voters, not just with economic optimism but moral clarity. “We need to talk about the fact that the United States has sacrificed our moral leadership,” said Marianne Williamson, an author who has never run for public office. Trump’s Republican Party painted the Democrats as too extreme. Chairwoman Ronna McDaniel tweeted that voters witnessed “a doubling down on Democrats radical, socialist proposals.”