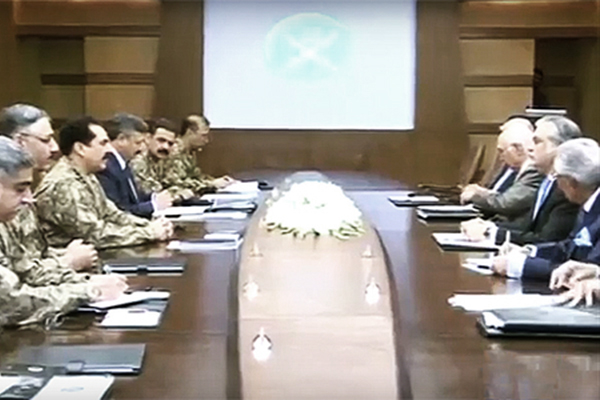 Today, we were greeted with a sight that says more about the state of civil-military relations in this country than if tomes had been written on the subject. And this is not even Dorian Gray’s picture in the cellar. It hangs outside, on the façade and informs us of what’s inside.

Two federal ministers, two advisors, and the foreign secretary sitting in the Army’s General Headquarters vis-à-vis the Army chief, directors-general of Inter Services Intelligence and Inter Services Public Relations, and other officers. The Army chief—who is holding forth in the clip that we have—saved them the ultimate ignominy by not sitting at the head of the table. Sometimes, one has to live with small mercies.

The clip and stills from it do not just tell us who formulates and drives security and foreign policies, but also where the current government stands. It also tells us that foreign relations continue to be subservient to security policies. We shall come to what this means.

Way back in 1729, Irish satirist Jonathan Swift wrote A Modest Proposal. Swift proposed, given the state of the kingdom, that children, especially belonging to poor breeders, be eaten.

“I have been assured by a very knowing American of my acquaintance in London, that a young healthy child well nursed is at a year old a most delicious, nourishing, and wholesome food, whether stewed, roasted, baked, or boiled; and I make no doubt that it will equally serve in a fricassee or a ragout.”

Now, unless one is a Twitter-using twit or a certified literalist idiot, the two categories often overlapping in the majority of cases, surely Swift could not be serious about stewing, baking, roasting or boiling a 1-year-old as wholesome food. Which then begs the question: what exactly was one of the greatest satirists of all times up to?

Apparently, those familiar with the history of Ireland and England’s dealing with her, realize that Swift, in his essay, was mocking both England and Ireland. England for the hand it had delivered Ireland but also Ireland, weighed down by inept politicians and her hypocritical rich. In other words, while Swift felt great aggravation at England’s exploitation of Ireland, he was no less peeved by the Irish people’s inability to pick themselves up by the bootstraps and do something about their squalor and misery, both sociopolitical and economic.

Consider this in our context. One must object to GHQ positioning itself on Mount Olympus and delivering the civilians a bad hand, but, equally, one must blame the civilians for meekly submitting to the gods, not one of them showing the grit either of Prometheus or Sisyphus.

I am not much on standing on ceremony, but certain protocols and hierarchies are important for the correct functioning of a state, any state. Those protocols and rules of business help keep everyone in their respective places. In other words, the defense minister is the boss of four people: the Chairman of the Joint Chiefs of Staff and the three service chiefs. He has a forum, the defense council. He is supposed to call its meetings under the rules and preside over those. At the higher level, the prime minister is supposed to chair meetings, under the rules, of the Cabinet Committee on National Security. It’s plain and simple.

Now, I do understand that we are not lucky to have in our midst a Swift, or a Yeats or Friel or Heaney and many more that Ireland was fortunate to have. We have pygmies and they are unlikely to take us far. Perhaps it is asking a lot to hold a press conference, say it as it is, resign and ask for a fresh mandate. That requires something more than the ability to deliver quips and barbs on the floor of the House or on TV channels.

And yet, some of us have to say it for a very simple reason: policies conceived in the dark womb of GHQ are known to deliver monsters and the monsters are not just striking at those who wear the uniform. They have struck all round and consumed more civilians than soldiers—civilians that just want to go about an honest day’s life and raise their children in a decent environment.

I am a realist when it comes to strategy. No matter how I look at my country’s strategy and threat responses, I cannot find in it one element of realism—hypernationalism, yes; realism, no.

The deep irony of what we have done and how we have reached where we have is that we did it in the name of realism. But realism doesn’t bring misery back home; it is supposed to heap it on others. That’s the lesson since Thucydides wrote his account of the Peloponnesian War and Cardinal Richelieu invoked his raison d’état. It’s like what Patton is reported to have said about fighting: no bastard ever won a war by dying for his country; he won it by making the other poor bastard die for his. Ditto for realism: a body count of 60,000 civilians and soldiers is not realism. It’s plain stupidity.

Bureaucracies by their very nature are hidebound. I have often mentioned organization theory: organizations cannot find solutions; they try to solve problems, one at a time, sequentially, piecemeal, almost never simultaneously. The broader vision must come from a political government. It cannot come from the Army or the intelligence agencies, the latter being the worst when it comes to walking and wallowing in known grooves, tactically, at the cost of higher strategy.

This, then, is not just about the civil-military imbalance. This isn’t about theories, either. There are many and one can invoke one or all of them. This is about survival. And survival includes all of us, civilians more than the soldiers. That is why the picture that shows the cracks in the system, like Dorian Gray’s, withered and decrepit, becomes our problem, of the ruled.

The whole article needs decrepit in much plainer diction.Does political apparatus warrants any favorable response from the electorate? Why is there is there is so much disinformation being backed if not sponsored by every one who is some body.It has become so difficult to ascertain the truth. Those who are narrating are further confounding the confusion.

With historical references, very interesting piece. A couple of days ago I retweetef the pic with title “Civil-military in the ‘same page'”! Or “civil-military hybrid, Pak style parliamentary system”

No wonder Newsweek Pakistan is not selling well!!!

Start by considering the position of Ireland under the British. The Irish did not have the relative luxury of being on the other side of the world, they were the doorstep of empire. Then read Swift’s essay.
Then consider what happens to anyone who writes in a similar vein in modern Pakistan, India or Bangladesh.

Excellent attempt to promote your ability to write. To me, you seem a neophyte Realist. You are right, there is no traces of realism or nationalism in Pakistan’s policy. But you can easily see, unless you are blind, that Islam is the basis for Islamabad’s security policies. Pakistan was created on the idea of Islam. It is run on Islamism.

They have invested in Taliban and other terrorist groups who are used as a tool to respond to current and potential threats – mainly Afghanistan and India.

Sendhi, Baloch, Pukhtuns, and Punjabis donnot share much in common. They have been tied together by a carefully crafted policy of Islamification. Their leaders have already discovered GHQ’s hypocrisy and the people have begun to see the truth.

Realism works when exercised by realists, not Islamists.

I smell a stinky indian out of you

One honest and fearless leader who would genuinely put Pakistan first can turn our country around by setting an example of accountability and he will earn the moral authority and power to put the military and religious genie where they belong , start an education blitz and bring about true fiscal reforms to end this flagrant and irresponsible borrowing .Pakistan zindabad