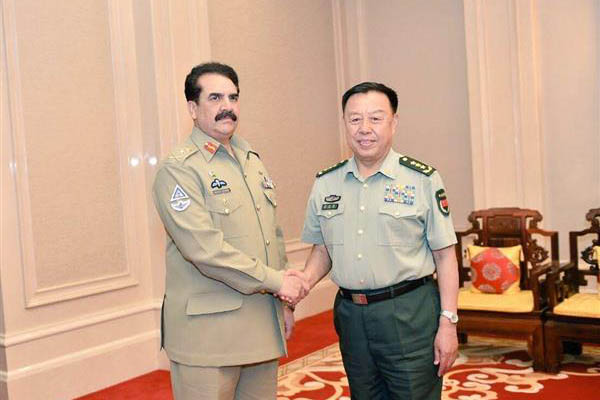 On May 17, the military’s Inter-Services Public Relations agency announced that the Army chief, Gen. Raheel Sharif, had visited China and met with military and political leaders there on matters of strategy. “Challenges to Pak are challenges to China,” the agency’s head tweeted, quoting Chinese leaders.

In response to Indian’s recent test of a new ballistic missile, which can destroy incoming nuclear-capable vehicles at an altitude of 40 kilometers, Pakistan had issued a routine “parity seeking” warning that it would not tolerate “military imbalance” in the region.

China’s strategy has never been parity seeking, which is why the U.S. and its allies haven’t been able to figure out what kind of competition they must have with it. In the past, Pakistan’s strategic thinking has been focused on military parity. But with the onset of the China-Pakistan Economic Corridor initiative, that thinking is undergoing change. And it is significant that the Pakistan Army, instead of watching from the sidelines, is directly involved with CPEC, thus following the Chinese choice of “economic leap” instead of “military parity.”

The world is bemused by the size of the $46-billion CPEC project. In today’s terms, the U.S. gave $120 billion to several countries in Europe after World War II under the Marshall Plan. China’s current trade stands at $3 trillion, heavily dependent on energy imports going through a “blockadable” Strait of Malacca in Southeast Asia. The Gwadar-Kashgar trade corridor will solve this logistics problem by converting Pakistan into a transportation hub while making it self-sufficient in electricity through power generation soaking up a lion’s share of the $46 billion.

Pakistan remains a troubled state still unable to tackle terrorism that repels investment. Any old parity seeking strategy against India will actually empower the terrorists now spread to all corners of the country. The real “equalizer” will be the economic interconnection CPEC offers with China whose economy—five times bigger than India’s—will take 50 years for India to catch up. CPEC will be open to all the neighbors of Pakistan and, if Pakistan follows China’s lead, India too will conduct its $100-billion trade with China through it.

So be it! There’s visible tension between Pakistan and the UAE for while the GCC has shown little interest in making Dubai its gateway, there’s little choice but to have Gawadar as the Hong Kong of the west. How, though, would the Arab world deal the notion of connecting the Iranian “source” to the CPEC.

Soon, China will have to decide whether it wants to maintain and even increase further its $100 billion yearly trade with India or get locked out of Indian market. I feel that is one single data point which my Pakistani friends should be looking at very very closely. Let us not get hurt by a myopic approach.After all we have been together for 1300 years and will be for many millenia more..

Prosperity through trade is an age-old formula, but the bottomline is nations should have something substantial to trade with. Nevertheless,economic “equalizer’ is a better strategy than military parity.For that to happen jihad , overt or covert, needs to be jettisoned. And it takes quite an effort for a nation , throughout its history, addicted to piggybacking , to shed old habits.