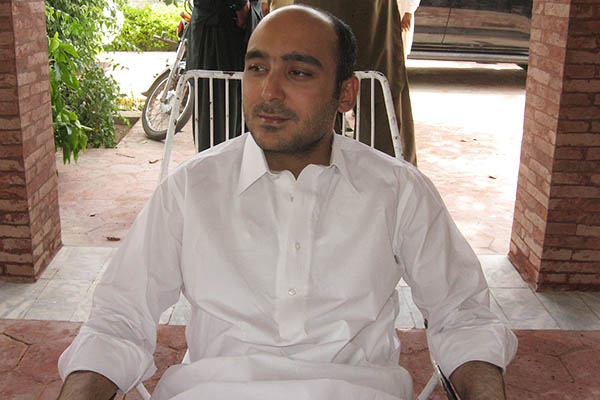 In a video message, ex-prime minister Yousaf Raza Gilani’s son Haider has urged his family to pay his ransom so he can return home.

Haider Raza Gilani, the youngest son of former prime minister Yousaf Raza Gilani, has in a video message urged his family to pay a ransom and secure his release, according to a security official.

“Why are you people not paying the ransom to the militants to get me released from their custody?” Gilani asks in the video that was sent to the prime minister’s family, according to the official, who requested anonymity as he is not authorized to speak to the media.

“Haider appeared haggard and had a full beard in the video sent to the former prime minister,” the security official said. “He was handcuffed and was sitting against a concrete wall. He looked very weak and requested his family to pay the money as soon as possible,” the security official added. The video message is the first contact that Gilani’s family has had with him since he was abducted nearly a year ago.

Militants, allegedly part of the umbrella Tehreek-e-Taliban Pakistan, abducted Haider Raza Gilani on May 9, 2013 and killed one of his aides while he was canvassing support for the Pakistan Peoples Party in his home district of Multan. Gilani had been campaigning for a seat in the Punjab Assembly at the time he was abducted.

Interior Minister Chaudhry Nisar Ali Khan confirmed to Newsweek that he had also seen the video, but claimed the TTP was not involved. “Haider claimed in that video that he had been abducted by militants that did not belong to the TTP,” he said, adding that this was new information that could help the ongoing investigation into the kidnapping.

“The militants who abducted Haider were demanding Rs. 2 billion earlier but have now asked for Rs. 500 million,” said Khan. “We had believed Haider was with the TTP and had asked for his release during the peace talks.”