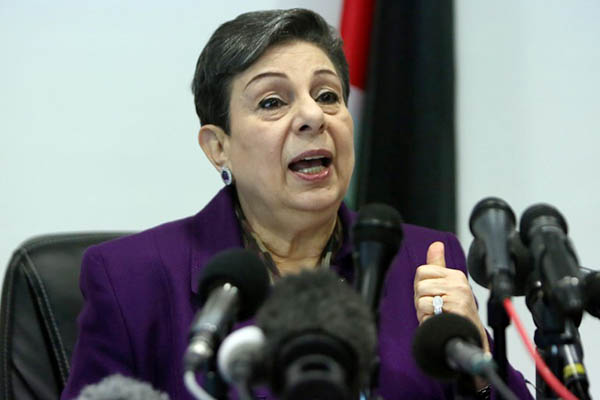 A senior Palestinian official on Wednesday blasted U.S. President Donald Trump’s United Nations envoy, accusing her of carrying out a “crusade” against the Palestinian people.

Hanan Ashrawi, a senior member of the Palestine Liberation Organization, said Nikki Haley was leading a “one-woman crusade… against Palestine and the Palestinian people individually and collectively.”

“Through an obsessive and targeted campaign of intimidation and threats, Miss Haley’s crusade does not miss an opportunity to put pressure on anyone that seeks to challenge Israeli impunity,” she added.

“Small wonder Hanan Ashrawi is unhappy – @nikkihaley fights for a fair treatment of #Israel, exactly what the #Palestinians don’t want…” he wrote on Twitter.

Palestinian officials have privately expressed increasing alarm at the Trump administration’s pro-Israel stance as the U.S. president seeks to restart peace negotiations. However, until Wednesday they had publicly refrained from criticizing senior U.S. officials.

Haley visited Israel and the Palestinian territories in June. Ashrawi said Haley was “compounding the victimization of the Palestinian people and browbeating the institutions that are meant to defend their rights.”

The statement was distributed by the PLO.

Since being nominated by Trump after his November victory, Haley has consistently accused the United Nations of systematic bias against Israel. The U.S. vetoed the appointment of a former Palestinian prime minister as U.N. envoy to Libya, while Haley has called on U.N. Secretary General Antonio Guterres to intervene to block a forthcoming vote on the city of Hebron, which declares the West Bank city under threat.

Trump came to office seeking to pursue what he has called the “ultimate deal” and has pledged to restart negotiations between Israeli and Palestinian leaders. But Arab media reports claim talks between the Palestinian leadership and Trump and his team—including his adviser and son-in-law Jared Kushner—have been fractious, allegations denied by the Palestinians.

Ashrawi said Haley was undermining the chances of peace by “pursuing her own agenda consistent with her anti-Palestinian obsession and as an apologist for Israel.”