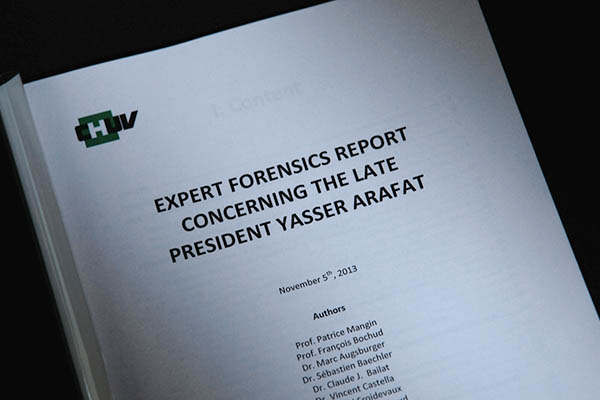 A PLO official on Thursday called for an international inquiry into “the killing” of Palestinian leader Yasser Arafat, a day after Swiss scientists said he probably died from polonium poisoning.

“The (test) results proved Arafat was poisoned by polonium, and this substance is owned by states, not people, meaning that the crime was committed by a state,” said Wasel Abu Yusef, a member of the Palestine Liberation Organization’s executive committee. “Just as a committee was formed to investigate the killing of (slain Lebanese prime minister) Rafiq Hariri, there must be a international committee to investigate the killing of president Arafat,” he said.

The central committee of the Fatah party, which is headed by Palestinian president Mahmud Abbas and which dominates the PLO, was to meet on Thursday at 1:00 p.m. to discuss the latest findings, said senior party official Amin Maqbul.

Swiss scientists, who carried out tests on Arafat’s remains, concluded he probably died from polonium poisoning, according to a text of their findings published by Al-Jazeera television on Wednesday.

The results “moderately support the proposition that the death was the consequence of poisoning with polonium-210,” said the 108-page analysis posted on the Qatar-based satellite broadcaster’s website.

The experts who penned the report are also to give a news conference in Lausanne on Thursday to discuss the results. And the Palestinian committee investigating Arafat’s death was to hold a news conference Friday at 10:00 a.m. in Ramallah, with head Tawfiq Tirawi discussing the report’s content, said Fatah spokesman Ahmed Assaf.

Tirawi said on Tuesday that he had received the findings of the Swiss laboratory, although he declined to disclose them.

Arafat died in France on Nov. 11, 2004 at the age of 75, but doctors were unable to specify the cause of death. No autopsy was carried out at the time, in line with his widow’s request. His remains were exhumed in November 2012 and samples taken, partly to investigate whether he had been poisoned—a suspicion that grew after the assassination of Russian ex-spy and Kremlin critic Alexander Litvinenko in London in 2006.

Speaking to Al-Jazeera, Arafat’s widow Suha denounced the poisoning as “a political crime” and the “assassination of a great leader.”

Israel’s foreign ministry scoffed at the notion that Arafat had been poisoned, suggesting that the investigation was not impartial.

The official Palestinian news agency WAFA said a separate Russian team appointed by the Palestinian Authority also handed in its report on Nov. 2.

Some 60 samples were taken from the remains of the late Palestinian leader in November last year for the probe into whether he had been poisoned by polonium. The samples were divided between the Swiss and Russian investigators and a French team carrying out an investigation at Suha Arafat’s request.

Polonium is a highly radioactive material rarely found outside military and scientific circles. Small doses exist in the soil and atmosphere, and even in the human body, but in high doses it is highly toxic if it is ingested or inhaled, and can damage the body’s tissues and organs.