PMLN Government Under Pressure Over Meetings with Militants 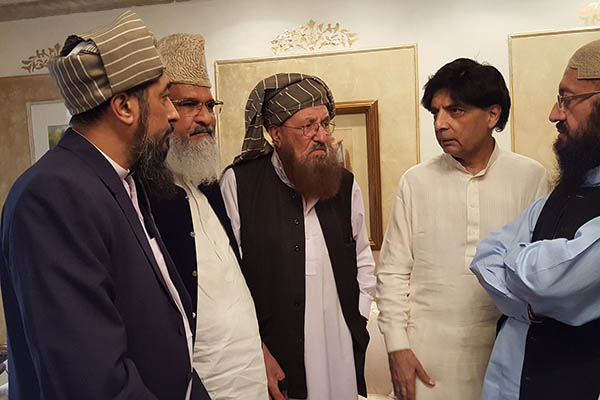 The move by cricketer-turned-politician Imran Khan’s party is set to put the government under added pressure as it fights a major corruption case against Prime Minister Nawaz Sharif.

Last week an inquiry by Supreme Court Justice Qazi Isa into a suicide bombing of a Quetta hospital in August that killed 73 people strongly criticized the government for failing to implement anti-terror policies. It singled out the interior minister for holding meetings with cleric Maulana Muhammad Ahmed Ludhianvi.

Ludhianvi heads the political wing of the Lashkar-e-Jhangvi militant group, which claimed the hospital attack along with the Islamic State. The two groups jointly also claimed an attack on a police academy in October that killed 61 people and one on a shrine that killed 52 in November. All three attacks were in Balochistan.

“The report has raised the issue of the Interior Ministry inviting and holding meetings with leaders of banned militant organizations,” a statement by Imran Khan’s party said. The speaker of Parliament will now decide whether to accept the request for a special meeting to debate the report. The interior minister has described the growing criticism as “one-sided.”

Overall levels of violence have decreased in Pakistan since the Army stepped up operations in the border regions and major cities in the wake of a Taliban school massacre of more than 150 people, mostly students, in December 2014. But the judge’s report said the government had a long way to go. “Proscribed organizations continue their illegal activities and new terrorist organizations are proscribed after long delays,” it said.