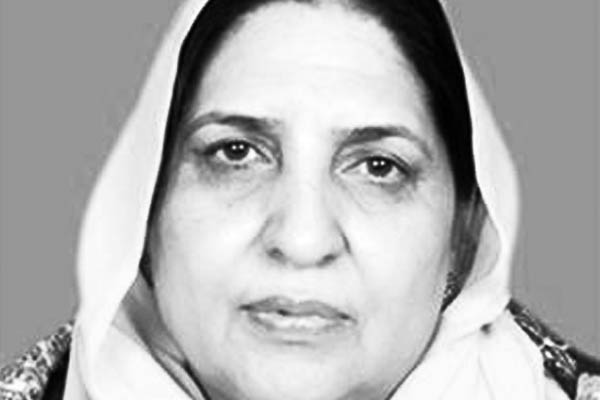 The Balochistan senator was diagnosed with COVID-19 last month, and had been placed on oxygen on Nov. 27

Kalsoom Perveen, a senator affiliated with the Pakistan Muslim League (Nawaz), died on Monday due to complications related to the novel coronavirus, according to a statement issued by the Senate Secretariat.

Perveen, hailing from Balochistan, was diagnosed with COVID-19 last month and had been undergoing treatment at the Ali Clinic in Islamabad. On Nov. 27, Senate Vice-Chairman Saleem Mandviwalla urged people to pray for her health, as he announced that she had been placed on oxygen due to her deteriorating condition.

Perveen completed her Bachelors of Education from the Balochistan University in 1994, and subsequently secured a Masters of Philosophy in History. She was elected to the Senate of Pakistan on a reserved seat for women as a candidate of the Pakistan Muslim League (Quaid) in the 2003 elections. Upon expiry of her term, she contested for a Senate seat in 2009 as an independent candidate after being denied a party ticket by the PMLQ, and was successfully re-elected. She subsequently joined the Balochistan National Party (Awami), with whom she remained affiliated until 2015.

After quitting the BNPA In January 2015, and resigning from her Senate seat, she joined the PMLN and was re-elected to the Senate on a reserved seat for women. She was due to retire in March 2020.

In a statement, President Arif Alvi prayed for eternal peace for the departed soul and commiserated with the bereaved family. Similarly, Senate Chairman Sadiq Sanjrani, Deputy Chairman Saleem Mandviwala, Leader of the House Dr. Shahzad Waseem and the Leader of the Opposition Raja Zafarul Haq expressed their condolences over her death.

In his statement, the Senate chairman said she had played an important role in Pakistani politics and had faithfully served residents of underdeveloped areas of Balochistan.

Information Minister Shibli Faraz, in a posting on Twitter, said Kalsoom Perveen had been an active member of the Senate. A progressive thinker, he said, she had been a strong voice for the people of Balochistan. He prayed for Allah Almighty to grant the departed soul highest ranks in heaven, and for her family to be granted the patience to bear the irreparable loss.

Pakistan is currently in the midst of the second wave of COVID-19 infections, and has been reporting an average of over 2,000 daily infections for the past month. The government has urged the public to adopt preventative measures, such as wearing face masks and maintaining social distancing, to curb the spread of the pandemic, which experts have earned is proving deadlier than the first wave.