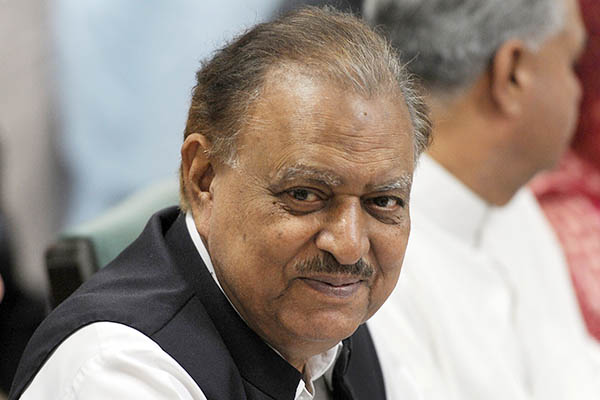 Boycotted by the opposition Pakistan Peoples Party, which complained it was not consulted on bringing the election forward from Aug. 6, Sharif’s candidate is certain to win.

Mamnoon Hussain is a businessman, close ally of the premier and a long serving member of the main ruling Pakistan Muslim League (Nawaz), and comes from the southern province of Sindh. His loyalty to Sharif and low-profile will shore up the prime minister’s authority and provide stark contrast to Zardari, considered a sharp political operator behind the scenes.

Supporters say Hussain’s election could be important domestically by giving the south some stake in the federal administration, otherwise dominated by Punjab, Sharif’s power base.

The PPP withdrew its candidate Raza Rabbani after the Supreme Court accepted a PMLN request to change the date, as lawmakers would be busy with pilgrimage and prayer at the end of Ramzan.

Rabbani, a highly respected senator capable of commanding cross-party support, said the new date would not leave enough time for campaigning in the four provincial capitals and in Islamabad.

Both houses of Parliament and the members of four provincial assemblies elect Pakistani presidents.

Zafar Iqbal Jhagra, a covering candidate for the PMLN, withdrew his nomination papers on Saturday. “There was no reason for Jhagra to be in the race when Hussain’s nomination papers have been accepted,” said party spokesman Asim Khan.

Voting will begin at 10 a.m. and last until 3 p.m., with the result expected to be announced late on Tuesday.

Constitutional amendments passed by the last PPP government mean that the presidency is largely a ceremonial post, a status likely to be cemented by the fact that Hussain has little personal clout.

Sharif won a commanding general election victory in May, which marked the first time a Pakistani civilian government completed a full term in office and handed over to another at the ballot box. After formally stepping down in September, many expect Zardari to spend significant time abroad out of concerns for his security and to escape the possibility of legal action for alleged corruption.

Unpopular and divisive within the PPP, Zardari’s departure could open a new chapter in the center-left party, which ran a rudderless general election campaign earlier this year.

His son, Bilawal, downgraded to patron-in-chief from his earlier post as PPP chairman, is too young to contest elections until September. Many observers also see him as a reluctant heir to the legacy of his assassinated mother, Benazir Bhutto.

“There is a crisis of leadership in the party,” said political analyst Hasan Askari. “Bilawal is still not in a position to handle party affairs. He needs his father behind him, but if Zardari is not settled in Pakistan, he won’t be able to provide that support to Bilawal.”

Zardari was elected after the PPP won an election victory in 2008 following the murder of his wife, who served twice as prime minister. He presided over a government condemned as inept but was admired for relinquishing powers accrued to the presidency by military dictators and for his nous in keeping his coalition in power.

Askari says Tuesday’s election will return Pakistan to a strong executive prime minister and a ceremonial head of state. “Mamnoon Hussain is a political lightweight and this is the reason Mr. Sharif chose him to become the next president,” he said.

But the last PPP government had a turbulent relationship with Pakistan’s top court and Askari warned that its boycott could lead to rocky relations with the PMLN. “Mamnoon Hussain will be elected easily and it will be an easy walkover, but he will start his term with a strong controversy. In the long-term it will cause tensions between PPP and PMLN.”