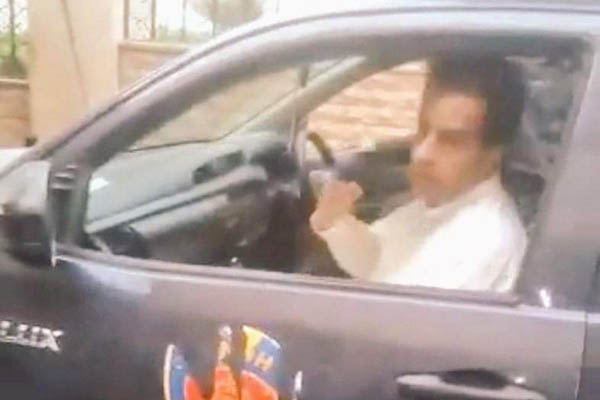 “Police broke my room door at the hotel I was staying at in Karachi and arrested Capt. Safdar,” she posted on Twitter, adding that she had been sleeping when the police officials broke into the room and dragged her husband out.

Despite Maryam sharing videos showing broken bits of the door, Pakistan Tehreek-e-Insaf minister Ali Zaidi tried to rubbish her claims and called her a liar. “Maryam [is] once again lying that the hotel door was broken,” he posted on Twitter, and claimed that Safdar wasn’t even handcuffed. “Does he look like he was arrested by force?” he questioned, seeking to imply rifts between the PMLN and the Pakistan Peoples Party, which has a government in Sindh province.

The arrest comes a day after a First Information Report (FIR) was registered against Safdar, Maryam, and 200 others for “violating the sanctity” of Quaid-e-Azam Mohammad Ali Jinnah’s mausoleum. On Sunday, during a visit to the mausoleum, Safdar led chants to “respect the vote” and “long live the mother of the nation.” Maryam and other senior PMLN leaders did not engage in the sloganeering, which was led by Safdar and echoed by party supporters who were also on the scene.

In the FIR registered against the PMLN, complainant Waqas Ahmed has alleged that Safdar jumped over the fence surrounding the Quaid’s grave and “threatened him and his fellows” with death when they tried to stop him. The complainant has also alleged that Safdar damaged government property before leaving the site with his followers. “My complaint is that Safdar and his cohort violated the sanctity of the Quaid’s mausoleum and his grave. A case registered against him for raising political slogans inside the mausoleum complex, death threats against me and for damaging government property,” it reads.

According to the FIR, a case has been registered against the accused under Section 6 (convening of meetings or processions in the mausoleum); Section 8 (entry into mausoleum with weapon); and Section 10 (penalty for contravention of provisions) of The Quaid-e-Azam’s Mazar (Protection and Maintenance) Ordinance, 1971. Safdar has also been accused of “attempted murder.”

Admitting that Safdar’s behavior was “inappropriate,” senior PPP leader and provincial minister Saeed Ghani claimed the arrest was not made on the directions of the Sindh government. “This was an attempt to create differences among the PDM [Pakistan Democratic Movement] parties, which would be foiled,” he said.

Muhammad Zubair, a senior PMLN leader and official spokesperson for Maryam and Nawaz Sharif, told a private broadcaster that he had been informed that the Sindh Inspector General of Police had been “kidnapped” by paramilitary Rangers and kept locked inside the local commander’s office until he issued the arrest orders for Safdar—a startling accusation that raises questions about the security establishment’s involvement in policing and politics.

Federal Education Minister Shafqat Mehmood said he was “glad Sindh Police has enforced the law and arrested Capt. Safdar.” He claimed a “crime” was committed at the Mazar-e-Quaid and the law must take its course.

Adviser to the P.M. on Accountability Shehzad Akbar, meanwhile, accused Maryam of spreading “propaganda” by informing the public of her husband’s arrest. “Rather than propaganda on Twitter shouldn’t you ask Bilawal Bhutto-Zardari as he has full control of Sindh police? Remember how dearly they wanted IG of their choice for Sindh!” he posted on Twitter.

Maritime Affairs Minister Zaidi has similarly warned the Sindh chief secretary and Sindh Inspector General of Police Mushtaq Mahar that action must be taken against the “hooligans who created ruckus” at the Quaid’s mausoleum. “If they are allowed to leave Karachi, you will be directly held responsible for letting them escape. You will be considered as aiders and abettors in the crime,” he said.