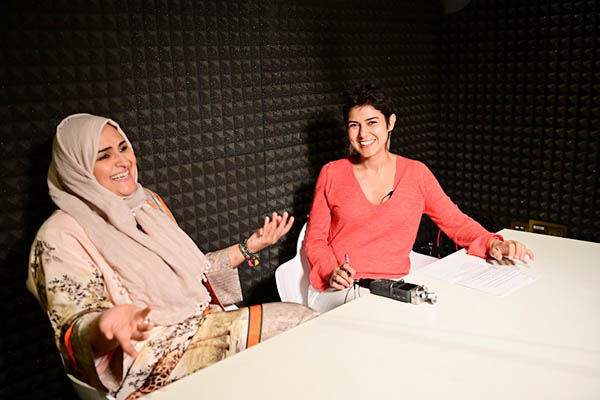 Rana Nawas left the corporate world nearly two years ago to produce and host a podcast—one that is now considered the most popular in the Arab world.

The English-language series, When Women Win, tells the stories of successful women from all over the world and, according to Apple, has become the most listened to podcast in the Middle East. It first gained traction in 2017 in Dubai, where it is produced, before it started to spread across the region.

Nawas said she created the series “to give women all over the world access to role models” by highlighting the “extraordinary things” ordinary women are doing. “I’ve been surprised at how the region has embraced When Women Win,” the 40-year-old told AFP, adding aviation giant Emirates Airline would start airing her show this month. “There’s clearly a thirst for this content, there’s clearly a thirst for female role models,” said the Briton of Lebanese and Palestinian origins.

When Women Win, which is available to download in 144 countries, is the most popular podcast even in the ultra-conservative kingdom of Saudi Arabia, according to Nawas. “I’ve been… surprised that actually my biggest market is Saudi Arabia,” said the former sales executive at an aviation company. “Everybody tells you [Saudis] only consume Arabic video content, so I was really delighted… to know that they also consume English-language audio content.”

Nawas, whose show is entirely self-funded, said she hopes to be able to draw financing from other sources. “It’s not sustainable,” she told AFP. “I am hoping in a couple of years, once I have the impact that I want… to start bringing investors on or bringing advertisers or sponsors on board.”

Nawas gets messages about the podcast from around the world via social media, including Instagram and LinkedIn, and believes the podcast will gain even more popularity. “I think the global future of podcasts is very positive, and the reason is people are not going to get less busy. We are only getting busier,” she said. “We need ways to consume content where it is a secondary activity.”

She said most people listen to podcasts on mobile devices during their commute, or while cleaning or cooking.

Like Nawas, Sudanese-born Omar Tom and friends created a podcast in 2016 that touches on topics they feel are neglected in traditional media. One such issue his English-language podcast—the Dukkan Show—focuses on is life in the Gulf for members of its huge expatriate population.

In the show, the hosts chat to guests as if sitting in a dukkan—or “corner store”—where it is common culture in the Arab world to socialize with friends and neighbors. “I wanted to fight a couple of stereotypes,” said Tom, 30, who is sporting a Made in Sudan T-shirt.

“One was the Sudanese stereotype when I first started, which is the lack of representation in media, and if there is a representation it doesn’t always speak for the diaspora or for the third-culture kids. As Arabs we don’t look so good in international and western media. So how do we tackle that? The only way to do that is to speak in a language that everybody would understand, which at the moment just happens to be English.”

For Rami Baassiri, 26, podcasts allow him to be more productive and do two things at once. “There’s a lot of downtime in my day, whether I’m commuting to work, driving, in the gym, in queues in the mall, at the airport, so I like to make use of that time,” he told AFP. “I think of podcasts as radio on demand. Radio … is very random. Podcasts allow me to control the radio by choosing whoever I want to listen to, whatever I want to listen to.”

Reem Hameed, a Canadian who takes part in the Dukkan Show, said podcasts are “here to stay and in the Arab world.”

“We have, in the Arab world, an amazing tradition of radio. If you think about how deep radio and its history falls into the Arab world, podcasting is a natural, digital extension of that,” said Hameed, 36, who is of Iraqi and Filipino origins.

Podcasts have been spreading across the Arab region, including Saudi Arabia, Oman, Kuwait, Jordan and Lebanon. In Jordan, the platform Sowt—or “voice”—has aired an array of podcasts that touch on subjects ranging from politics to music since its launch in 2017.

Hebah Fisher, chief executive and co-founder of Dubai-based network Kerning Cultures, the first venture-funded podcast company in the Middle East, said podcasts are the future. “Our seed round is a strong signal for the podcast industry in the Middle East: the medium is taken seriously, and its value for listeners and users is clear,” she told AFP in an emailed statement. “Podcasting is the future of media.”