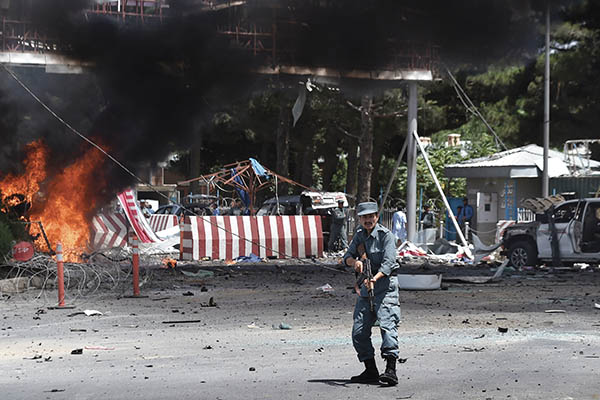 An Afghan policeman outside the site of a huge blast in Kabul. Shah Marai—AFP

Last month, Kabul confirmed to the world that Taliban chief Mullah Omar was dead. Within a few days, the Taliban crowned Mullah Akhtar Manoor as his replacement—a move praised by Afghan observers who saw him as the ‘moderate’ option. Less than a month into his reign, their hopes have been dashed. Facing a leadership challenge from Omar’s family and Taliban factions who believe he is too close to the Pakistani military, Mansoor has called off peace talks and launched a surge of attacks across Afghanistan. Instead of trying to find a solution, Kabul has taken to pointing fingers at Pakistan—accusing Islamabad of not doing enough to capture militants hiding in its territory. Put bluntly, Kabul miscalculated. They—wrongly—assumed Omar’s death would demoralize the Taliban and force them into committing to peace. Instead, the extremists have rallied and undertaken even more dramatic attacks to bone up their credentials. Pakistan’s military is no innocent, but in this instance, Afghanistan’s government is merely paying for its own mistakes.