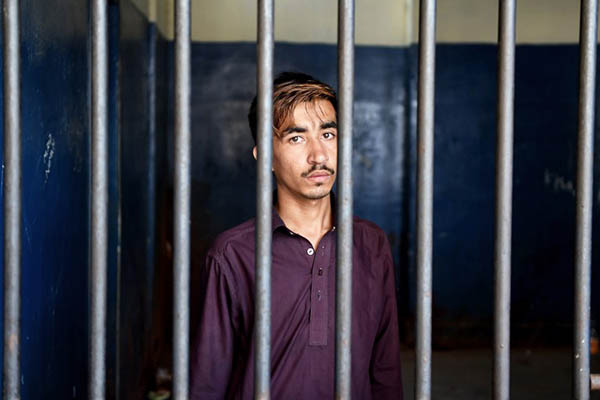 Murder case filed against Hayat Khan by state to prevent family from forgiving him for his crime.

A Pakistani man who used a kitchen knife to murder his sister told AFP on Thursday he flew into a rage after catching her using a mobile phone, the latest “honor killing” in country.

Hayat Khan, aged around 20, attacked his 16-year-old sister Sumaira at their home in the low-income Orangi Town neighborhood of Karachi on Wednesday, senior police officer Azfar Mahesar said. He later threw her out of the house where she lay on the steps as neighbors gathered to help.

A woman using a mobile phone, in particular to speak to a male non-relative, is seen as highly taboo among conservative elements in Pakistani society.

Speaking to AFP from his jail cell, Hayat said: “She was talking to someone at the entrance of the house, I asked her who was there and she replied why are you bothered it’s none of your business, I am free to talk to anyone. I just wanted to scare her off with the knife but it hurt her fatally.” He added: “Of course it is very sad, I wish I could also die.”

Mobile phone footage shot by an unknown onlooker showed several men and boys standing around Sumaira, who was seen dressed in a red tunic and orange headscarf and draped in a blanket as she writhed in pain. A young boy is shown fighting back tears as one man says in Pashto: “Let’s take her to a hospital in a car,” and another man replies: “It’s almost here, it’s coming brother.”

The video then pans to Hayat, dressed in a purple shirt and blue jeans, who stares directly at the camera.

Abdul Hakeem, a local resident, said: “She was taken by car to a private hospital but she died before she arrived.”

Officer Mahesar said that police had taken the unusual step of making themselves the complainants in the case, in order to avoid a loophole in the law that allows the relatives of the victim to forgive the killer. “We have registered the case on behalf of the state as we don’t want to give the family the option of settling the case outside court,” he said.

The move came after Inayat Khan, Hayat and Sumaira’s father, had told local media “what is done is done” and said he forgave his son.

Hundreds of women are murdered by their relatives in Pakistan each year on the pretext of defending family “honor.” Pakistan amended its criminal code in 2005 to prevent men who kill female relatives escaping punishment by pardoning themselves as an “heir” of the victim. But it is left to a judge’s discretion to decide whether to impose a prison sentence when other relatives of the victim forgive the killer—a loophole that critics say remains exploited.

Prime Minister Nawaz Sharif vowed to eradicate the “evil” of honor killings in February but no fresh legislation has been tabled since then.