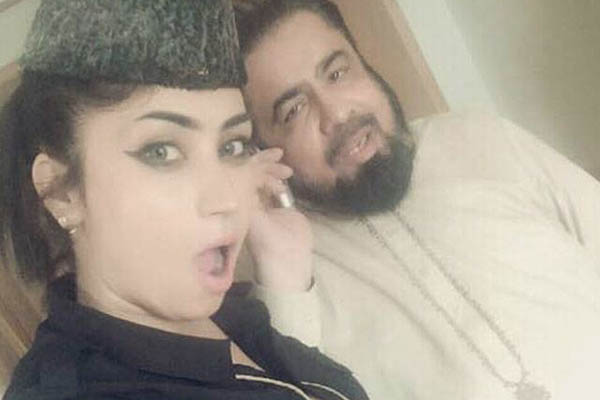 The photo Baloch posted of herself with Mufti Qavi. Facebook

Police on Wednesday arrested a high-profile mullah over his alleged role in the murder of a social media star Qandeel Baloch last year, which reignited calls for action against so-called “honor killings.”

The model, who shot to fame for her provocative selfies—tame by Western standards, but which polarized the Muslim-majority country—was strangled last July. Her brother Muhammad Waseem has confessed to the killing, though his case has yet to go to trial in Multan.

Prosecutors had been urging the court to also indict the cleric, Mufti Abdul Qavi, whose phone records showed he had been in touch with Waseem after he was embroiled in controversy with Baloch earlier last year. He was sacked from his position on a government committee and rebuked by a religious affairs council after Baloch released pictures of herself with him in a hotel room weeks before her murder, wearing his hat and pouting.

She later called Qavi a “blot on the name of Islam” and accused him of inappropriate behavior. “I thought I would expose him as he is in reality,” she told AFP at the time, adding: “He is a different person alone and different when he has his followers around him.”

Prosecutor Ziaur Rehman told the judge that Qavi’s phone records showed he had been in contact with Baloch’s brother Waseem and cousin Haq Nawaz, accused by police of being an accomplice, before the murder.

On Wednesday a Multan court revoked Qavi’s bail and ordered his arrest. Qavi, who has denied any role in the killing, briefly fled the court, but was taken into custody by police later in the day.

Some of Baloch’s more notorious acts included offering to perform a striptease for the Pakistani cricket team, and donning a plunging scarlet dress on Valentine’s Day. Initially dismissed as a Kim Kardashian-like figure, she was seen by some, including many young people, as empowered in a country where women have fought for their rights for decades.

Her murder reignited calls for action against an epidemic of so-called “honor killings,” in which a victim is killed by a close relative—who could subsequently be pardoned by another family member under a now-excised Pakistani law. In October last year Parliament passed a law aimed at removing the ability to forgive “honor” killers. But critics contend some loopholes still exist.

Baloch’s brother Waseem told a press conference in the days after the killing that he had no remorse over what he did, saying that “of course” he had murdered his sister and adding that her behavior had been “intolerable.”

Waseem, his cousin Nawaz, and a taxi driver named Abdul Basit were indicted in December, with Waseem pleading not guilty, despite his earlier statements.

The trial has yet to begin.