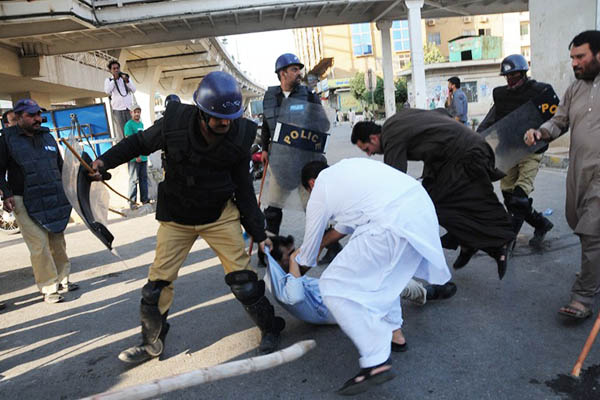 Imran Khan warns PMLN government that nothing will stop him from reaching Islamabad on Nov. 2.

Police clashed with PTI supporters in Rawalpindi on Friday, arresting dozens ahead of a planned protest by cricketer-turned-politician Imran Khan aimed at unseating the government.

Police charged stone-throwing protesters with batons and fired tear gas at the supporters, who had come out on the streets of Islamabad’s twin-city to demonstrate against arrests made the previous night after authorities banned all public gatherings in the capital for two months.

Municipal workers meanwhile used shipping containers to block major roads leading from Rawalpindi to Islamabad, where Khan has vowed to lead a demonstration on Nov. 2 to demand Prime Minister Nawaz Sharif step down over revelations made in the Panama Papers that his family have offshore bank accounts.

The exact number of arrests could not be confirmed, but a spokesman for Khan’s Pakistan Tehreek-e-Insaaf party said 43 workers arrested on Thursday night were still in detention while others had been released.

A heavy contingent of police meanwhile surrounded Khan’s house in Banni Gala, a leafy suburb of Islamabad, preventing him from leaving—though he has not been formally arrested. Dozens of Khan’s supporters also gathered around the house, chanting anti-government slogans calling for Sharif to resign.

Addressing media outside his residence, Khan once again reiterated that he would reach D-Chowk in Islamabad on Nov. 2 “no matter what.” He also warned Sharif that he would never stop trying to remove him from power. “I will never leave you alone as long as I’m alive,” he added.

Moments after Khan’s appearance before the media his supporters clashed with police, chanting slogans and pelting stones at police vehicles. An AFP reporter at the scene said protesters damaged a number of vehicles, breaking windscreens and chanting “Go Nawaz Go.” The police retaliated with tear gas, dispersing the demonstrators.

Dozens of protesters belonging to Khan’s party staged a sit-in in Karachi demanding release of the detained opposition activists.

Sharif is under growing pressure from opposition parties over his children’s offshore bank accounts that were revealed in the Panama Papers leak. “This will be a decisive and historic gathering, people will come together with resolve to hold the prime minister accountable,” Khan told reporters earlier.

Khan led a previous mass protest in the summer of 2014 that lasted four months, allying himself to populist cleric Tahir-ul-Qadri to back a sit-in in front of parliament calling for the government to resign over election rigging allegations. The new protest plan comes at a sensitive time for Sharif, with the Supreme Court due to start hearing a case about the Panama Papers revelations on Nov. 1.