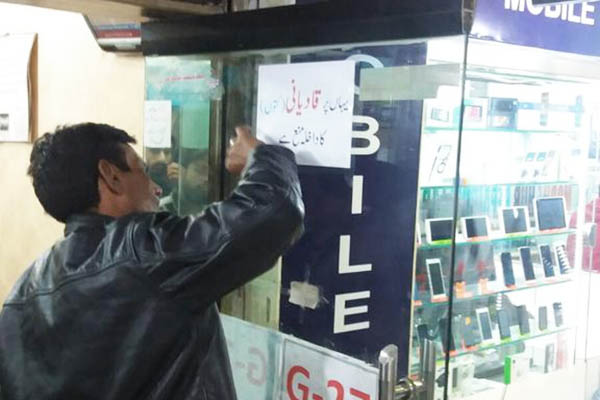 Accused had displayed banners outside his shop, banning the Ahmadi minority from entering it.

Police charged a shopkeeper with blasphemy on Monday after he attempted to ban members of the Ahmadi minority from entering his shop, a rare bid by authorities to protect an ethnic group that usually suffers state-sanctioned persecution.

The shopkeeper in Lahore was charged with spreading religious hatred, officials said, citing the National Action Plan, a grand scheme to combat extremism put in place in the wake of a Taliban massacre at a school last year that left more than 150 people dead. The move comes just two days before the first anniversary of the assault on the Army-run school in Peshawar, which shocked and outraged Pakistanis already scarred by nearly a decade of attacks.

According to police, Aabid Hashmi, the owner of a computer shop in the city’s upmarket commercial region, had displayed a poster outside his shop banning Ahmadi customers from entering. “The arrest was made under National Action Plan (NAP) for spreading religious hatred,” said Haider Ashraf, a senior police official. A spokesman for the Ahmadi community, Amir Mehmood, welcomed the move as the “first drop of rain.”

Senior columnist and former lawmaker Ayaz Amir said the move was “significant” and could help reduce persecution of the Ahmadis.

The group was legally declared non-Muslim in Pakistan and has long been persecuted in the deeply conservative country. In November, Ahmadi families were forced to flee Jehlum after an angry mob torched a factory there, accusing the minority of burning Qurans. Hardline Islamic scholars denounce the Ahmadis as heretics, describing their beliefs as blasphemy—a hugely sensitive issue in Pakistan, where even unproven allegations stir mob lynchings and violence. But authorities have previously defended state-sanctioned discrimination against the group, insisting they are “constitutionally protected.”