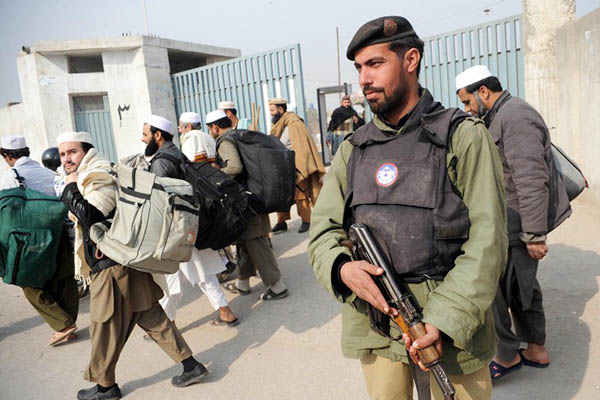 A policeman stands guard outside the Tableeghi Markaz in Peshawar. A. Majeed—AFP

Investigators say they cannot hold any group responsible until investigations are complete.

Police investigating a bomb attack on a preaching center in Peshawar said Friday they had no clear idea who could have been behind the blast.

The blast at the Tableeghi Markaz in troubled Peshawar on Thursday evening killed at least nine preachers and wounded more than 50, officials said. The Pakistani Taliban strongly denied any link to the attack on the center run by the Tableeghi Jamaat, a respected organization that enjoys good relations with the authorities as well as other religious groups.

“We are investigating it but we cannot blame any group until completion of our investigations,” said senior police official Mohammad Faisal on Friday.

Pakistan has been battling a homegrown Islamist insurgency in recent years and Peshawar has been a particular hotspot for bombings. Militant groups are usually quick to claim responsibility for attacks but no one has come forward to admit Thursday’s blast.

Medics in the city’s main Lady Reading Hospital said 28 injured were still under medical treatment with six in critical condition.

Thursday’s attack was the second on a Tableeghi Jamaat center in recent years. Last year in January, a similar type of bomb in Swat hit a preaching center, killing 22 people and wounding more than 80. The Pakistani Taliban also denied any involvement in that bombing.

Residents in Peshawar were in grief and shock over the attack saying it was a peaceful place where they came for worship. “This attack was really depressing, we never thought that anyone can attack this peaceful place,” said Daud Khan, a milk seller in Peshawar. Police said they have tightened the security at the center, with a body search for all visitors and the installation of a walkthrough gate scanner.