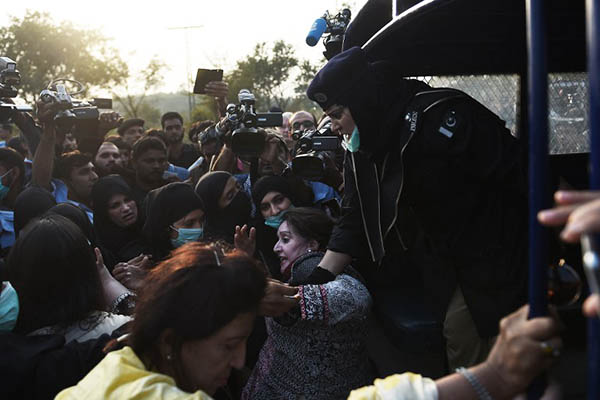 Police firing tear gas clashed on Monday with thousands of opposition supporters traveling from northwest Pakistan toward Islamabad, where their leader Imran Khan has vowed to stage a million-strong demonstration later this week.

The clashes took place on the Peshawar-Islamabad motorway, more than 50 kilometers from the capital, as around 5,000 stick-wielding party workers tried to remove barricades put in place by police.

It was the latest confrontation before a planned lockdown of the capital on Wednesday by the Pakistan Tehreek-e-Insaf (PTI) party of cricketer-turned-politician Khan. It is seeking Prime Minister Nawaz Sharif’s resignation over his children’s offshore bank accounts, revealed in the Panama Papers leak.

Hundreds of PTI workers from across the country have been arrested including in the capital, where a ban on protests was invoked last week.

The Islamabad High Court on Monday partly lifted the order, saying the opposition had the right to demonstrate but could not disrupt citizens’ daily lives. Authorities in Punjab province have also closed a motorway using shipping containers, as police and paramilitary forces stand guard around the highway.

Addressing supporters from his home in Islamabad, Khan vowed a million of his supporters would reach the capital on Nov. 2 and force Sharif from power. “One million people will come out in Islamabad day after tomorrow. The whole of Pakistan is watching to see whether these police whose salaries are paid by us are really police or the personal guards of the Sharif family,” he said.

The planned protest comes at a sensitive time for Sharif, with the Supreme Court due to start hearing a case about the Panama Papers revelations on Tuesday. Relations between Sharif and the Army meanwhile are at low ebb following the publication of a media report, which said civilian officials had warned the military to stop backing jihadist fighters abroad.

The article, published in the English daily Dawn, caused an uproar and the journalist who wrote it was briefly hit with a travel ban. On Saturday the information minister was sacked for allegedly not doing enough to stop publication of the report.

The military has used the pretext of civil unrest to sweep in and replace elected governments three times in the country’s history. Analysts have warned that Sharif may need to strike a deal with the Army to ensure his survival. Observers say the military is keen to impose its choice as successor to Army chief Gen. Raheel Sharif, whose term expires at the end of November, as part of the deal.

I am impressed by the composition of the top brass and coverage of your stories that are comparable to world class journalism. Please brief about words allowed for comments.
Did we see independence accompanying democracy? “No,” you would agree. More importantly, we’re governed, guided, and driven by Qur’an and Sunmah but Islam is cut off from its pathof “Sabeellillah” for more than two centuries. If you might digest this, and find an interest in Pakistan’s righteous future, I offer myself as a freee lance correspondent.