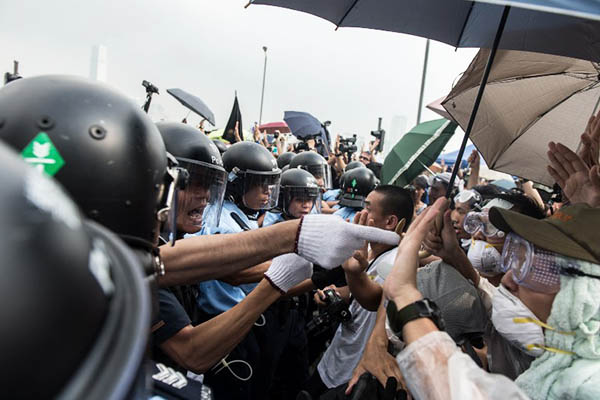 Pro-democracy activists in Hong Kong scuffled with police outside government headquarters as tensions ran high Friday, despite an eleventh-hour agreement for talks, as China said the demonstrators were “doomed to fail.”

Foreign attention is fixed on the crisis unfolding in one of the world’s financial capitals, with the United States, Europe and Japan all expressing their concern, while Hong Kong’s last British governor said Beijing was “foolish” for not investing more trust in the city’s seven million people.

China, however, reiterated its denunciations of the protest movement, saying there was “no room to make concessions on important principles.”

Although most overnight demonstrators had gone home by Friday morning, around 100 remained outside the government complex, which is now the focal point of protests that have brought parts of the city to a standstill for five days. Demonstrators had set an ultimatum of midnight on Thursday for Chief Executive Leung Chun-ying to resign and for Beijing to guarantee full democracy to the former British colony, instead of vetting candidates who want to stand for the chief executive’s job in 2017 elections.

Leung refused to quit but in a dramatic televised appearance shortly before the midnight deadline, he appointed his deputy to sit down with a prominent students’ group that has been at the vanguard of the protests. There was no sign of the talks starting by Friday afternoon, however. And mistrust was rife that Leung was merely trying to buy time in the hope that the Hong Kong public will tire of the disruption caused by the mass sit-ins, with businesses losing money, schools shut and bus routes severed.

“I think he is avoiding people who are voicing their views,” said Abigail Hon, 19. “From now on I am going to stay overnight. We hope that Leung can face the problem and respond to what we demand right now,” she said, adding that she wants Leung to speak directly with the students.

But the Occupy Central protest group said it welcomed the talks, and hoped they would “provide a turning point in the current political stalemate.”

Police pushed through around 100 demonstrators who were blocking an exit at the government offices Friday morning, saying that a seriously ill officer needed to be let out in an ambulance. In chaotic scenes, protesters refused to move and shouted “liar, liar!” Relations between protesters and police have deteriorated since tear-gas was fired to disperse crowds last Sunday and boxes carrying rubber bullets were seen being carried by officers Thursday. Police finally barged their way through to make a path for the ambulance.

On Aug. 31, China said residents of Hong Kong would be able to vote for their next chief executive in 2017 but that only candidates vetted by a loyalist committee would be allowed to stand, a decision dismissed as “fake democracy” by campaigners. In an editorial on Friday, the People’s Daily, the Communist Party mouthpiece, repeated Beijing’s unbending response. “Upholding the [Aug. 31] decision of the standing committee of the National People’s Congress is the necessary decision, and the only decision,” it said, adding that the protests are “against legal principles, and doomed to fail.”

And analysts say it is very unlikely that Leung will step down, in what would be a massive loss of face for Beijing and the Hong Kong establishment, at a time when the Communist Party is already working hard to suppress internal dissent on the mainland. But international concern continues to grow, despite China’s angry statements that the Hong Kong crisis is nobody else’s business.

The European Union and Japan underlined Hong Kong’s importance to the international community. In light of comments by President Barack Obama and Secretary of State John Kerry, U.S. consul-general Clifford Hart stressed that “America’s leaders are focused on developments here.”

“As each of you thinks about the future, I just want to repeat my government’s strong support for dialogue as the best means to get beyond the current impasse,” he said in a Facebook message.

Ex-governor Chris Patten, who brought the curtain down on British rule of Hong Kong in 1997, welcomed the government’s offer to talk with the students. But in comments to the BBC, he also said: “I think it betrays a rather foolish sense on the side of Beijing that they can’t trust the people of Hong Kong to behave responsibly and sensibly. They can.”