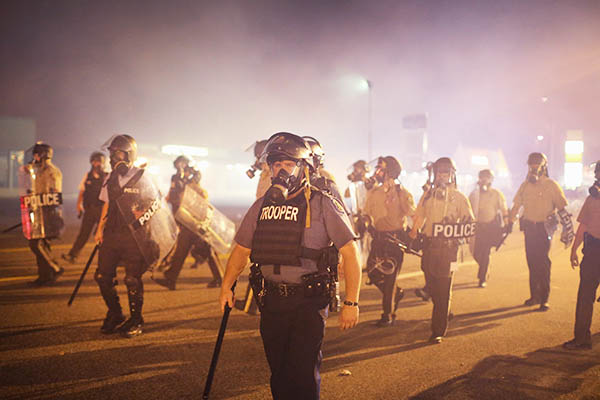 Riot police, claiming that someone had opened fire on them, hurled tear gas and marched on demonstrators.

Police in body armor, helmets and gas masks moved in with armored vehicles to disperse a mob of mostly young people about three hours before the midnight curfew came into effect. Some of the youths carried signs protesting police brutality. Many had their hands up in the air, and others taunted police and threw back tear gas canisters.

Police dispersed the protest after rioters threw Molotov cocktails at officers, the St. Louis County Police said on Twitter. An officer from the St. Charles County said that gunshots were fired in the direction of the police.

The city has endured days of violence since a white police officer on Aug. 9 shot dead Michael Brown, an unarmed black 18-year-old. Images posted by the Post-Dispatch showed vandals smashing the windows of a McDonald’s restaurant, but journalists posted on social media that the protesters had been forced to break into the restaurant to seek medical care for people who had been tear gassed.

“We were walking up peacefully towards the command center to kneel in protest in front of the police, to say ‘our hands are up,’” said Lisha Williams, who was in the march. “They started firing tear gas at us out of the blue. I know what tear gas is, my face was burning,” said Williams, who described herself as an army veteran.

Reports also emerged from the site that police were threatening journalists who were trying to report on the event, with several journalist taken into custody before being released without any charges filed.

Brown was shot at least six times, twice in the head and four times in the right arm, according to a New York Times report, citing a preliminary private autopsy. All the shots were fired into his front, the Times reported, citing Michael Baden, the former New York City chief medical examiner who conducted an autopsy at the family’s request.

“People have been asking: How many times was he shot? This information could have been released on Day One,” Baden told The Times. “They don’t do that, even as feelings built up among the citizenry that there was a cover-up. We are hoping to alleviate that,” he said.

Baden, 80, is a famous forensic pathologist who has testified at the trial of OJ Simpson, and was consulted for investigations into the deaths of John F. Kennedy and actor John Belushi. Benjamin Crump, the attorney representing Brown’s family, said on Twitter that he and Baden would hold a press conference Monday morning.

Crump, who called Brown’s death an “execution,” earlier represented the family of Trayvon Martin, the unarmed black 16-year-old shot dead in Florida in 2012. Brown’s family has accused authorities of a “devious” attempt to smear their son’s character after police named him as a suspect in the robbery of a Ferguson convenience store and released a surveillance video of the incident. Police said the officer, unaware of the robbery, stopped the teen merely for walking in the middle of the street.

The late Sunday protest, held near the site where Brown was killed, followed a much larger and peaceful event at the Greater Grace Church in Ferguson earlier in the day honoring Brown. Captain Ron Johnson, the African-American state patrol officer put in charge of Ferguson security, apologized for the shooting.

“I want to start off by talking to Mike Brown’s family. I want you to know my heart goes out to you, and I say that I’m sorry,” Johnson said to loud cheering and applause from a crowd of more than 1,300. “I will be here as long as it takes.”

Johnson, who grew up in St Louis, also acknowledged the personal toll the violence has taken on him. “The last 24 hours have been tough for me,” he said.

Hundreds more stood outside the church that was filled to capacity, where passing cars honked at length. Young people who had gathered outside the church held their hands in the air, paying homage to what some witnesses said was Brown’s last gesture before being shot.

Civil rights activist Jesse Jackson, who was at the morning event, was surprised later about the evening violence. “I’m astonished at the reversal of the mood,” he told CNN, saying that the mood earlier among Ferguson residents had been more constructive.

Amid the growing violence, the federal government has stepped up its involvement in the investigation. Attorney General Eric Holder is due to brief President Barack Obama on the violence in Ferguson on Monday, the White House said in a statement. “Our immediate goal is to make sure that the residents of Ferguson are safe, that the looting stops, that the vandalism stops, that the people who are living in the community are confident that justice will be done,” Obama senior adviser Valerie Jarrett told AURN radio.

FBI agents are already in Ferguson interviewing witnesses to the shooting, officials said. The U.S. Justice Department said that a federal medical examiner would carry out an autopsy on Brown’s body, citing the case’s “extraordinary circumstances.” It will be the third autopsy after Baden’s and an autopsy performed by state medical examiners.