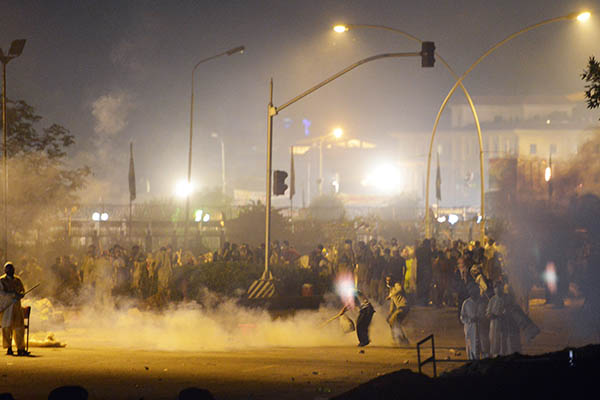 At least 120 people injured, according to officials, after 25,000 people tried to march on P.M. House.

At least 120 people were wounded in clashes between thousands of police and protesters in Islamabad on Saturday, as a fortnight-long political impasse took a violent turn when opposition groups attempted to storm the Prime Minister’s House.

The protesters had been camped outside Parliament House since Aug. 15, demanding Prime Minister Nawaz Sharif quit over claims the elections that swept him to power last year were rigged.

Saturday’s violence began after around 25,000 people marched from Parliament to the Prime Minister’s House and then attempted to remove barricades around it with cranes, an AFP reporter at the scene said. According to reports, some damage was done to the gate of the President’s House, prompting the police to respond with tear gas and rubber bullets.

“There are 1,600 to 2,000 trained terrorists. They have 200 women who are trained in the use of firearms and they have come with the intention of occupying state buildings,” defense minister Khawaja Asif told AFP. “These are buildings that are symbols of the state,” he said. “Their attempts are being resisted. And we will resist these with full force.”

Police told media that they had not used any live ammunition. “We have only used tear gas, or if absolutely necessary, rubber bullets to subdue the protesters,” said Qaim Muqam, the inspector general of Islamabad. He also denied reports that a woman had been killed during the police shelling.

The injured were rushed to Islamabad’s two main hospitals, and the number of casualties is expected to rise as clashes continue. “We have received more than 50 injured, most of them have rubber bullet injuries. Seventeen among them are women,” said Wasim Khawaja, a spokesman for the Pakistan Institute of Medical Sciences hospital. A second doctor said seven police officials were among were the wounded.

Khurram Ghuman, a spokesman at Islamabad’s Poly Clinic hospital, said they had received around 70 wounded, bringing the total number of injured people brought to the hospitals to at least 120. “There are 20 women among them and most have been affected by tear gas, but they all are in stable condition,” he said.

The protesters are led by cricketer-turned-politician Imran Khan and Canadian cleric Tahir ul Qadri, who both claim that the 2013 elections which saw Prime Sharif sweep to power were massively rigged.

Local and foreign observers said the polls were credible, and analysts believe the protests have been coordinated by the Army as a means of re-asserting its dominance over civilian authorities.

The crisis took on a new dimension Thursday after the government asked Army chief Gen. Raheel Sharif to mediate, raising fears the military would use the situation to enact a “soft coup” and increase its dominance over civilian authorities. Paramilitary troops and soldiers standing guard to protect the P.M.’s House as well as other sensitive installations had to prevent protesters from storming Parliament House after several broke in. The protesters camped out in the lawns surrounding the building, but agreed to stay outside.

Women and children have been prominent among both protest groups, and the rising number of casualties is set to further polarize the already embittered political atmosphere. But government officials defended the use of force. “The demonstrators attacked first. They wanted to occupy the Prime Minister’s House and stage a sit-in there,” said Asif Kirmani, an aide of Sharif.

Khan told Express News during Saturday’s violence that he was inside a shipping container in front of the Prime Minister’s House. Qadri was in a bulletproof car close to the scene, according to local media.

The government earlier struck a defiant note, issuing a statement saying that Sharif would not be stepping down. “There is no question of resignation or proceeding on leave by Prime Minister Muhammad Nawaz Sharif, nor any member from the government side has made such suggestion,” the statement said. Earlier on Saturday, Sharif had dismissed the two-week old impasse as a “tiny storm” that would end soon.

Khan alleges the 2013 general elections that swept Sharif to power in a landslide were rigged as part of a conspiracy involving the former chief justice and thousands of election commission workers.

Qadri has demanded wholesale changes to Pakistan’s political system, and called for an interim “unity government” while they are implemented. The leaders have drawn thousands to the streets of Islamabad, but their call has not mobilized mass support in a country of 180 million people.