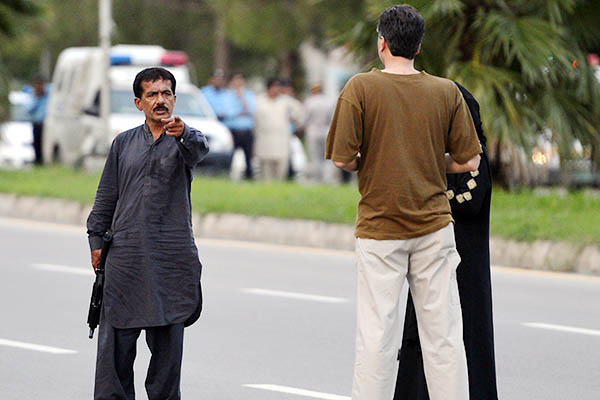 Police defended Friday their response to a gunman who shut down the heart of Islamabad for five hours in a standoff that ended with him being shot and wounded.

Waving two semi-automatic guns and occasionally firing into the air, Mohammad Sikandar was accompanied by his wife and children throughout the tense drama late Thursday that took place close to Islamabad’s political quarter.

Broadcast live on several news channels, hours of stalemate came to a chaotic end when Zamarud Khan, a senior member of the opposition Pakistan Peoples Party sent to negotiate, made a sudden lunge at the gunman.

Khan slipped and missed his man, but police opened fire, seriously wounding Sikandar in the chest and leg before arresting him, dragging him off as blood poured from his wounds. Doctors said he was improving on Friday.

The drama in the center of the normally sleepy capital drew a huge crowd of onlookers and media, and Islamabad police chief Muhammad Rizwan said they were to blame for the slow response, denying his men had dithered in the face of the challenge.

“The commando operation was delayed because we needed proper space between the general public and the gunman,” he said on Geo TV. “We had asked media and the general public who had gathered there to stay at least 300 meters away for their own safety, but they did not move away.”

Rizwan said there was a gap of only 50 meters between the crowd and Sikandar, making it impossible to tackle him safely. He said it appeared Sikandar was not part of any extremist outfit.

“The preliminary investigations suggest that this man is not associated with any group and it was his own individual act,” he told Geo TV.

The standoff began around 5:30 p.m. when police flagged down the car for a traffic offence on the central Jinnah Avenue neighborhood. Sikandar then started firing into the air, forcing markets and shops in the area to close, before making a series of rambling demands including the resignation of the government, the imposition of Shariah law and the release of a son from prison in Dubai.

Some police officials said he appeared to have mental health problems but Rizwan said this was yet to be confirmed.

He underwent three hours of surgery during the night, Dr. Wasim Khawaja, spokesman for the Pakistan Institute of Medical Sciences hospital, said. “Hopefully he will be normal in 24 hours. We have put him on a ventilator and he is maintaining his blood pressure,” Khawaja added.

Sikandar’s wife was also shot in the leg as the scene reached its conclusion but doctors said she was out of danger on Friday.

As the standoff played out during the evening, Sikandar smoked cigarettes and spoke to TV stations on his mobile phone while his children played around his car.

A stupid act by Zamrud Khan and it is even hilarious that people are considering him an hero. The culprit was surrounded by the police and only one road was blocked, so everything was well under control, Islamabad Police acted wisely they were exhausting the A** hole and that was a professional thinking. The media and the foolish Islamabadian by standers made this a complete mess.

Zamrud endangered the lives of the woman and children, forget himself and the by standers, Zamrud ran for his life when real danger came, just watch the clip again.

Don’t people know that every now and then this sort of incidents are reported from USA, in almost all the cases the end result over there is loss of lives, either in colleges, schools or churches.

We and our electronic media have made it a habit to degrade our law enforcing agencies including army.
The Police should now search every car entering Islamabad, regardless it has ladies or children, I think this will be welcomed by the Islamabadians.
And hats off to the real hero, Dr Rizwan who was negotiating with the man and wanted to avoid any bloodshed.