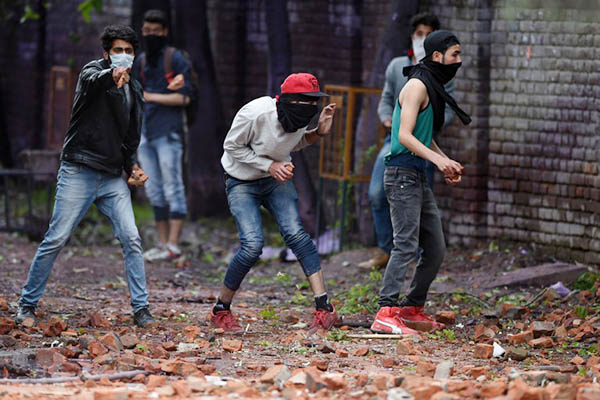 Violence intensifies as hundreds take to streets against government forces

Police fired into a crowd of stone-throwing students in Indian-administered Kashmir on Monday, as violence in the disputed region intensified.

Hundreds of student protesters shouted “We want freedom” and “Go India, go back” as they fought with government forces after taking to the streets of Srinagar.

An AFP reporter saw police fire live rounds as well as tear gas and water canon to try to disperse the protestors. The violence broke out as colleges in the city reopened following clashes last week between students and government forces.

“A few students were detained. Three photojournalists and eight policemen were injured with stones,” a police officer told AFP on condition of anonymity.

Nearly 100 students and around the same number of police were wounded in last week’s disturbances, which prompted authorities to temporarily shut down schools and universities. The students were angered by a raid earlier this month on a college in the southern district of Pulwama in which police attempted to detain the alleged ringleaders of earlier protests.

Government forces are not supposed to enter college or university premises without special permission.

Indian-administered Kashmir has been tense since April 9, when eight people were killed by police and paramilitary troops during election day violence. Footage apparently showing a civilian tied to the front of an army jeep to deter protesters from throwing stones at the vehicle has also caused outrage after it was circulated on social media.

Kashmir has been divided between India and Pakistan since the end of British rule in 1947. Both claim the territory in its entirety. Armed encounters between rebels fighting Indian rule and government forces have become more frequent since the killing of a popular rebel leader by security forces last July sparked widespread unrest. Police and army officials say dozens of local youths have joined the rebel ranks since then.