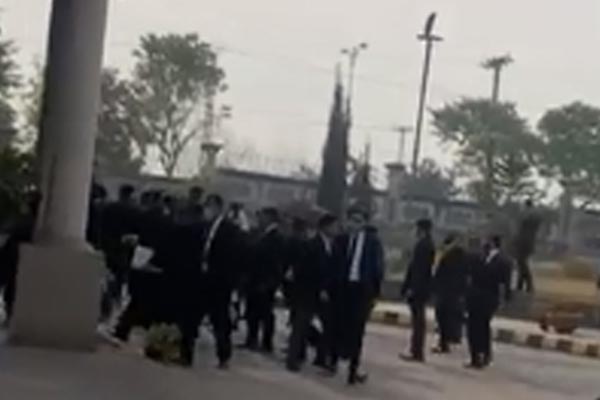 Police in Islamabad on Monday registered cases against lawyers who had been part of a mob that stormed the Islamabad High Court and vandalized it, forcing Chief Justice Athar Minallah to confine himself to his chambers.

According to the IHC, 21 lawyers have been booked for their role in the riot under various sections of the Pakistan Penal Code and the Anti-Terrorism Act. It said that police were conducting raids in various parts of the city to arrest the accused lawyers, adding that separate contempt of court proceedings would also be initiated against anyone found guilty of having vandalized court property.

The riot erupted on Monday morning as hundreds of angry lawyers demonstrated against the Capital Development Authority (CDA) for demolishing illegally constructed chambers at the city’s district and sessions court. The lawyers besieged the courtroom and the chamber of IHC Chief Justice Athar Minallah, holding him hostage for around three hours. Photos and videos from the site show the mob breaking windows and doors of the Chief Justice Block and refusing to accept Minallah’s calls for calm.

The protesters also manhandled the staff and even beat up the superintendent of police deployed at the Chief Justice Block. They forcibly stopped media from covering the riot and also manhandled some journalists. The siege continued until paramilitary Rangers and police reinforcements took control of the situation.

Before the protest devolved into a riot, elected lawyers’ representatives presented a charter of demands to judges to end the standoff. The list of demands wanted the reconstruction of the demolished chambers on state’s expense, removal of Deputy Commissioner Hamza Shafqaat and release of lawyers detained by police during the clearance operation. They also wanted the chief justice to announce acceptance of the demands before the lawyers in the bar room.

Apart from the release of the detained lawyers, all other demands were rejected outright.

After the mob violence, the high court halted proceedings for the day. Meanwhile, lawyers’ bodies issued a strike call against the razing of chambers.

Instead of condemning the violence perpetrated by the lawyers, legal fraternities issued statements condemning the CDA’s demolition of lawyers’ illegally construction chambers. The Supreme Court Bar Association, in a statement, termed the incident “regrettable” and called for a thorough probe. “[SCBA] hereby demands a high-powered Judicial Commission constituted by Honorable Chief Justice of Supreme Court of Pakistan so that those found responsible must be brought to book quickly,” it said.

The Islamabad High Court Bar Association, and the District Bar Association, meanwhile, issued a joint statement regretting the closure of courts. They also urged the Chief Justice of Pakistan to hold a judicial inquiry into the matter.