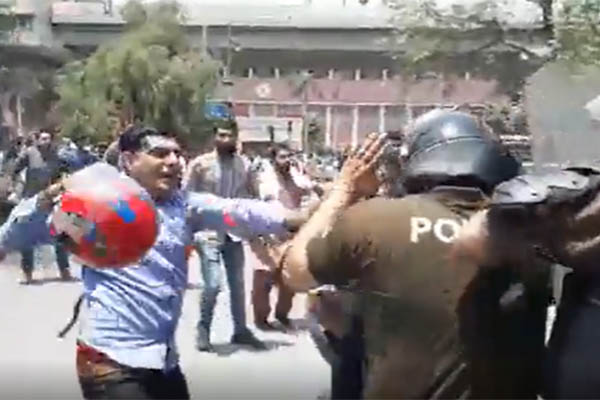 Clashes erupted between police and supporters of the Pakistan Tehreek-e-Insaf (PTI) in Lahore as the party’s ‘Azadi March’ commenced in various parts of the country with an aim at converging in the federal capital.

A day earlier, PTI Chairman Imran Khan had vowed to lead the march from Peshawar regardless of the government’s ban on the gathering. In a press conference, he had urged his supporters to “let go of fear” and “not fear arrests,” reiterating that his protest was a matter of “jihad” and not “politics.” Referring to the government’s plans to erect barricades to halt the march, he had urged youth to remove all obstacles and reach Islamabad to join him in demanding the dissolution of assemblies and early elections.

Since morning—the PTI had designated 8 a.m. as the time to gather for the marches—footage has emerged of clashes in several cities, with marchers trying to pull down barricades or remove containers blocking roads and police baton-charging and resorting to tear gas shelling to disperse them.

The PTI was leading at least four separate rallies from Lahore led by Hammad Azhar, Shafqat Mahmood, Dr. Yasmin Rashid and the lawyers’ community, respectively. According to the official Twitter account of the PTI, Azhar’s rally of a few hundred people was initially stopped at Punjab capital’s Shahdara areas, but was able to proceed after they removed shipping containers blocking access to the Ravi bridge. He said his group had reached GT Road and was now headed toward Islamabad.

When Azhar’s convoy reached Kala Shah Kaku, it faced heavy police deployment and there was a brief tug of war between PTI supporters and the law enforcement personnel when they tried to detain the former minister. He was eventually freed from police and the convoy resumed its journey.

Footage shows PTI workers and lawyers clashing with police near the GPO Chowk, with reports that PTI leader Zubair Niazi was briefly taken into custody before being freed by the marchers. The group then proceeded toward Batti Chowk to leave for Islamabad.

The greatest number of clashes were reported at Dr. Rashid’s rally. Footage shows extensive tear-gas shelling on her convoy, with reports that her car was also damaged. While she initially managed to cross Batti Chowk, there were reports that she had not yet reached Lahore’s exit points to continue the journey toward Islamabad. There is also footage, provided by the PTI, of Rashid arguing with police over “harassment” and demanding she be allowed to pass.

Separately, in Gujranwala, clashes were reported between PTI supporters and police when the marchers tried to cross barricades near Khanki Headworks. The clashes ended after the marchers successfully forced their way through the obstructions and moved toward Islamabad.

In Sialkot, PTI leader Ali Asjad Malhi was taken into custody by police after they dispersed a convoy heading toward Islamabad.

In Islamabad, police have reported that they have taken roughly a dozen PTI workers into custody for violating Section 144.