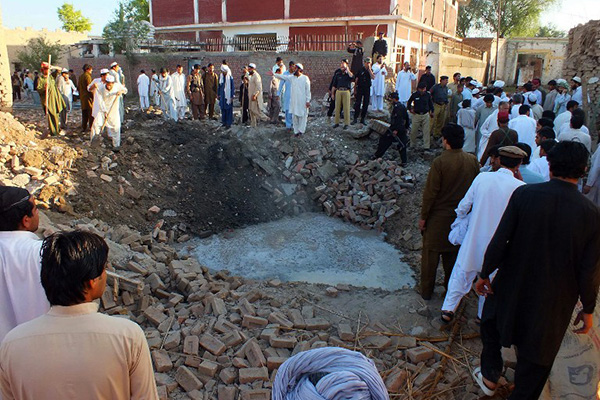 A suicide bomber rammed his explosives-packed car into a barrier outside a police station in Bannu, Khyber-Pakhtunkhwa, on Wednesday, killing two and injuring at least 23.

“Two people including one woman and a policeman have been killed in the suicide attack near Domail police station in Bannu,” said local police chief Abdul Ghafoor Afridi.

A doctor at the government hospital said they received 23 people with injuries from the blast site. “Out of them, two were critical and have been sent to the military hospital,” according to Dr. Sher Afzal. “Among the injured, there were two women, three children aged between 2 to 5 years, and five policemen,” he added.

Police chief Afridi said seven houses and part of the police station collapsed due to the blast. Another police official said the suicide bomber attacked from behind the building as authorities had deployed heavy security measures around the police station.

“He hit a barrier installed at a distance from the police station. The woman killed in the attack was a civilian,” said Azmat Ali Khan, a senior police official.

A bomb-disposal squad official said more than 500 kilograms of explosives were used in the attack. “The vehicle used for the attack was completely destroyed after the blast,” said Kismat Khan, the bomb squad official.

No one has claimed responsibility for the blast yet, but Taliban in the region often target police and security forces.