Police Take on Protesters in Missouri 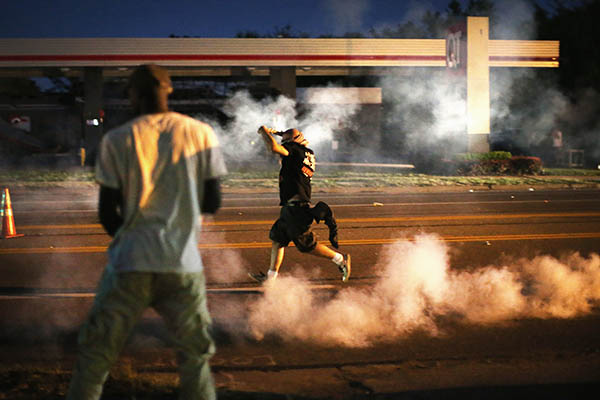 Residents of Ferguson have been protesting against the death of an unarmed black teen at the hands of a police officer.

Police in Missouri fired tear gas and smoke bombs late Wednesday at a crowd of protesters demonstrating against the death of an unarmed black teen by an officer, U.S. media reported.

CNN and other media reported that police officers in riot gear marched toward the protesters near a burned out gas station where demonstrators have gathered in the town of Ferguson, a St. Louis suburb. Police separately arrested two journalists reporting on the unrest that has roiled Ferguson since aspiring college student Michael Brown, 18, died Saturday in a police shooting.

His death has triggered rioting and stirred comparisons to the February 2012 fatal shooting of unarmed teenager Trayvon Martin in Florida.

Wesley Lowery, a Washington Post political reporter, and Ryan Reilly, a Huffington Post reporter, were arrested in a McDonald’s after police entered the restaurant and ordered people to leave, the pair wrote on Twitter. In a series of tweets, Lowery said they were given no explanation for their arrest other than “trespassing” and were not charged with any offenses before being released.

“I’m emotional, but need to note: Ryan and I are fine. Have seen people in Ferguson hurt by gas/rubber bullets. This wasn’t that,” Lowery tweeted.

Lowery also said the police officers “assaulted” him because the two reporters were not leaving the McDonald’s quickly enough. Reilly also described the pair’s arrest in a series of tweets. “SWAT just invade McDonald’s where I’m working/recharging. Asked for ID when I took photo,” he wrote.

Earlier, police fired several shots at a 19-year-old who pointed a handgun in their direction as they dispersed around 30 people who had gathered near where the rioting had occurred, according to the St. Louis Post-Dispatch. The young man was taken to hospital and his name has not been released.

Officials in Ferguson urged demonstrators to remain calm. Mayor James Knowles called for “any groups wishing to assemble in prayer or in protest do so only during daylight.”

“Unfortunately, those who wish to co-opt peaceful protests and turn them into violent demonstrations have been able to do so over the past several days during the evening hours,” said a statement issued by Knowles and the Ferguson City Council.

Looters targeted more than a dozen businesses in the St. Louis suburb overnight Sunday after a vigil on the sidewalk where Brown died erupted into clashes with police armed with tear gas, clubs and rubber bullets. On Tuesday, U.S. President Barack Obama appealed for calm after the “heartbreaking” incident, noting that the FBI had opened a civil rights investigation into Brown’s death.

Witnesses and police have given conflicting versions of how the teenager was shot in broad daylight, two days before he was due to start college.