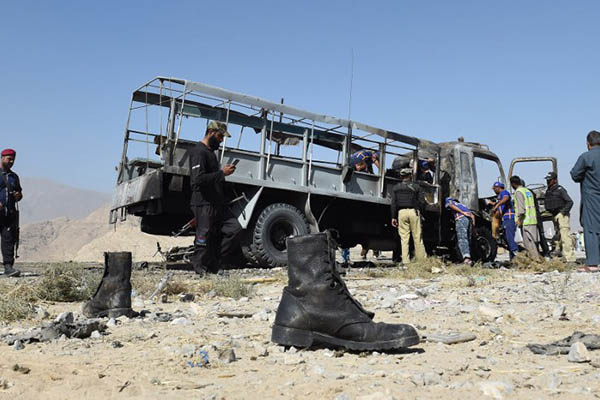 At least six people were killed and many wounded in an apparent suicide blast targeting a police vehicle during the morning rush hour in Balochistan province early Wednesday, officials said.

The group of elite police was targeted on the Sariab road in the outskirts of Quetta, capital of Balochistan province, as they headed to work. “Police were targeted in this attack,” provincial home minister Sarfraz Bugti told reporters, adding that five police and one civilian had been killed. “Twenty-two others are injured,” he said.

A police official in Quetta gave a different toll, putting the figures at seven dead and 10 wounded, and said the attack came as the police were commuting to work. “We have sent teams to the site to help the victims,” he said.

Bugti told AFP that a car rammed the police vehicle before catching fire, adding it was “apparently a suicide attack,” in an account confirmed by senior police official Abdul Razzaq Cheema.

Balochistan, which borders Iran and Afghanistan, has oil and gas resources but is afflicted by Islamist militancy, sectarian violence and a separatist insurgency.

Members of the minority Shia community and security forces are frequently attacked by militants in the province.