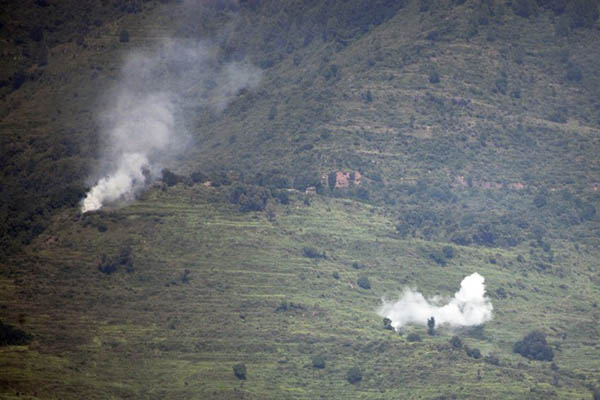 A policeman and a civilian were killed Tuesday when suspected rebels opened fire outside a Muslim shrine in India-administered Kashmir, police said.

The militants targeted the police officer, who was guarding the shrine of Tujjar Sharif. “The policeman unfortunately lost his life, and a civilian who was shot during the attack succumbed to his injuries later,” said deputy inspector general of police for the area, Gharib Das. “It appeared that the policeman on guard was the target, not the shrine.”

It was not clear if the 70-year-old disabled civilian was shot by militants or he was hit by a bullet when police returned fire. The militants fled the area after the attack and the dead police officer’s automatic rifle was missing, Das said, adding security forces had launched a hunt for the attackers.

In separate incidents the same day, one civilian was killed and four others injured in areas of Pakistan-administered Kashmir, the military said. “One civilian embraced shahadat and four were injured due to unprovoked firing by India in Jandrot, Nikhial and Karela sectors,” the Pakistani military said in a statement. “The Indians started unprovoked firing in the afternoon, which still continues in Nikhial sector. Pakistani troops fittingly responding to Indian firing.”

Last week a bomb hidden in a steel pot exploded inside the compound of a mosque in India-administered Kashmir, injuring 10 people. No rebel group claimed responsibility for the rare explosion.

Several groups have for decades battled hundreds of thousands of Indian troops deployed in the region, for independence or a merger of the territory with Pakistan. The conflict has left tens of thousands, mostly civilians, dead.

Kashmir has been divided between India and Pakistan since the end British colonial rule in 1947. Both claim the disputed Himalayan region in its entirety.

The two countries have exchanged heavy mortar fire across their disputed border in Kashmir almost daily since last week. A total of nine civilians on both sides have been killed and many injured. The cross-border exchange of fire continued Tuesday in the southern Poonch sector of the region, said India’s defense ministry spokesman Manish Mehta.