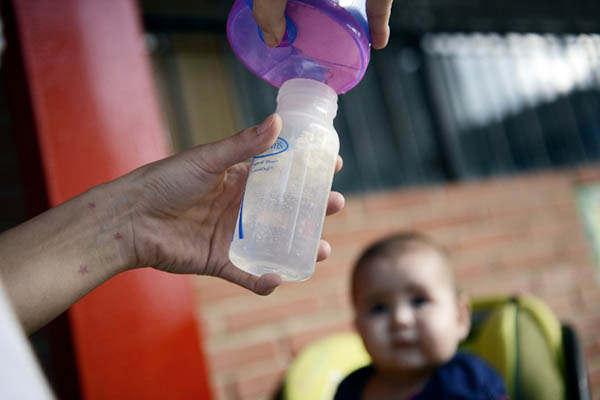 Nine-month-old boy and his family were charged with the crime of throwing rocks at gas company officials conducting an anti-theft inspection.

A policeman has been suspended for bringing a case of attempted murder against a nine-month old boy and forcing the crying infant to appear in court, officials said Friday.

Baby Mohammad Musa, along with other members of his family, was booked for throwing rocks at gas company officials carrying out an anti-theft inspection in the low-income Ahata Thanedaran neighborhood of Lahore on Feb. 1, said the family’s lawyer Chaudhry Irfan Sadiq. Inspector Kashif Muhammad, who attended the alleged crime scene and has since been suspended, wrote in his report that it was a case of attempted murder.

Appearing in a packed courtroom with around 30 others accused in the case on Thursday, Musa was seen crying as his grandfather Muhammad Yasin, a 50-year-old laborer, held him on his shoulder. He later drank milk from a bottle as Yasin fielded questions from reporters.

“Everyone in the court was saying ‘How can such a small child be implicated in any case?’ What kind of police do we have?” Yasin said. He accused the police of fabricating the charges because they were colluding with a rival party who wanted to see the accused evicted from their land.

Critics say Pakistan’s notoriously corrupt police force often trump up false charges either to extract bribes or because they have been paid off.

Judge Rafaqat Ali Qamar ordered the inspector to be suspended and granted the child bail, though he will have to appear at the next hearing on April 12. But Sadiq, the lawyer, said the charges against the child should have been dropped.

“The court should have simply referred the minor’s case to high court for dropping of the charges against the innocent child and acquit him from the case as the minimum criminal responsibility age is seven,” said Sadiq.

Pakistan last year approved raising the minimum age of criminal responsibility from seven to 12 years, except for in terrorism cases.