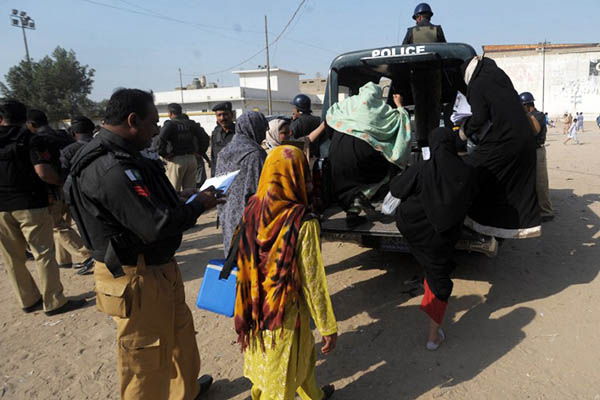 Two policemen guarding a polio vaccination team in northwest Pakistan were shot dead by armed men on Tuesday, police said, the latest setback to efforts to eradicate the crippling disease.

Militant strikes and threats of violence have badly hampered a campaign to stamp out polio in Pakistan which, along with Nigeria and Afghanistan, is one of only three countries where the disease remains endemic.

Tuesday’s attack took place in the village of Gandi Umar Khan, about 20 kilometers west of the nearest city of Dera Ismail Khan, on the second day of an inoculation drive, said senior police official Sadiq Baloch.

Nisar Khan Marwat, another police officer, confirmed the attack, adding: “Two police officials were accompanying two local polio workers when four gunmen riding on two motorbikes shot at them.” The policemen died on the spot while the polio workers themselves were unhurt, he added.

According to an AFP tally, 54 people have been killed in attacks on polio teams in Pakistan since December 2012. Pakistan recorded 91 cases of polio last year, up from 58 in 2012, according to the World Health Organization (WHO). Victims are left dead, paralyzed or with withered limbs.

Earlier this month, a bomb attack on a polio team in the northwest killed 12 people, including 11 paramilitary troops guarding a team of vaccinators.