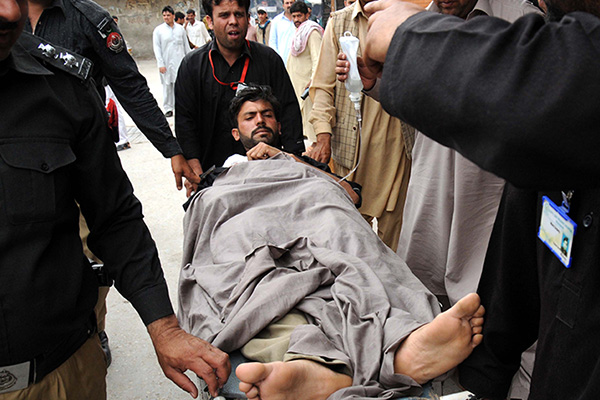 Police help an injured colleague following an attack on a polio vaccination team in April. AFP

Unidentified gunmen killed a polio worker, injured another on the first day of a new campaign.

Gunmen shot dead a female polio vaccinator in northwest Pakistan on Tuesday, police said, the latest in a series of deadly attacks on vaccination teams.

The two attackers drove by the team on a motorcycle and opened fire on them as they went to administer polio drops on the edge of the city of Peshawar. Today is the first day of a polio vaccination campaign covering 43 union councils of Peshawar.

“One lady worker was killed and another wounded in the attack on the first day of a three-day campaign meant for areas on the outskirts of Peshawar,” said local police official Shafi Ullah. “The incident occurred near Khyber Agency,” he added. Following the attack, police cordoned off the area and launched a search operation for the attackers.

Jameel Shah, a spokesman for the city’s Lady Reading Hospital, confirmed the death. “Two women were brought to the hospital,” he said. “One of them is dead while doctors are operating on the other.”

No one has claimed responsibility for the killing. But last year the Pakistani Taliban banned polio vaccinations in the tribal region of Waziristan, alleging the campaign was a cover for espionage. Late last year polio teams came under attack in Karachi and in the northwest, with nine health workers killed by gunmen.

Pakistan, Afghanistan, and Nigeria are the only countries where polio is endemic. Polio cases in Pakistan hit 198 in 2011, the highest figure for more than a decade and the most of any country in the world, according to the U.N.

U.N. officials say there are about 161,000 children in North Waziristan district alone who have not received a polio vaccine since June last year.