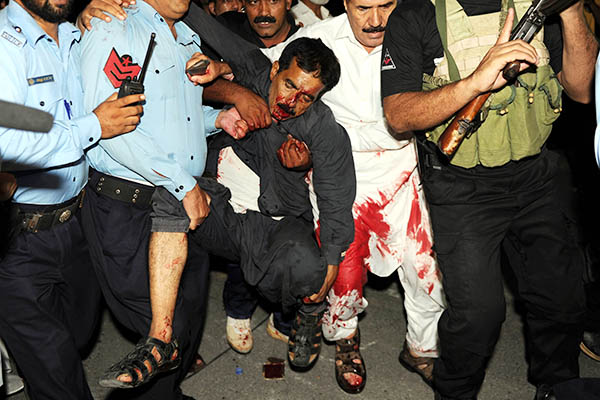 Police snipers shot and seriously wounded a gunman who was tackled live on television by a politician during a dramatic standoff close to Islamabad’s high-security political quarter.

The man, who was with his wife and children as he issued demands for the imposition of Islamic law, was said by doctors to be fighting for his life after the five-hour incident, which shut down part of the city late Thursday.

Identified by Pakistani media as Mohammad Sikandar, the man touted two semi-automatic guns as he smoked cigarettes while giving interviews to TV stations over his mobile phone.

“Muslims are being subjected to cruelties everywhere in the world,” Sikandar, wearing black, told Dunya News as his children sat in the back of the Toyota Corolla and his wife stood calmly nearby. At one point she handed a note to a plainclothes police negotiator.

The standoff began around 5:30 p.m. when police flagged down the car for a traffic violation in the central Jinnah Avenue neighborhood—less than a kilometer from the presidency and parliament buildings.

Sikandar then started firing into the air, forcing markets and shops in the area to close. Crowds of onlookers gathered at a distance, as TV anchors broadcasting the incident live on air queried how police checkpoints had failed to stop an armed man from driving into the sensitive area.

The standoff ended at 11:00 p.m. after Zamurd Khan, a leader of the opposition Pakistan Peoples Party who was acting as a negotiator, jumped on the gunman and tried to disarm him.

Sikandar broke free and fired at Khan, who was not injured. Police and paramilitary commandos then shot the gunman as he tried to flee, hauling him away as blood poured from his wounds. The children were unharmed.

Television footage showed the young boy trying to rush over to his father after he was shot, but Khan held him back.

“Condition of Sikandar is critical and doctors are trying to save his life,” said Dr. Wasim Khawaja, a spokesman for the Pakistan Institute of Medical Sciences hospital in central Islamabad. “He received two bullets, one in the upper body and one in the left leg,” he said. “The woman was hit in her right leg but she is out of danger.”

Khan is being hailed a national hero by some local media. “I was sitting at home and watching this whole drama on TV,” the politician told Geo TV. “I came out with a commitment that I will catch this guy, even if it takes my life.”

Islamabad police officials said Sikandar appeared to have mental health problems. His demands included enforcement of Shariah law in Pakistan, the government’s resignation, and the release of a son apparently jailed in Dubai.

Bomb disposal experts checked his car for explosives after the gunman’s arrest and gave the all clear.

Zardari “lauded the courage of PPP leader Zamurd Khan who, risking his own life, has helped law-enforcing agencies getting hold of the armed man tonight in Islamabad,” a statement from the presidency said. “The president also appreciated the role of security agencies who have handled the situation in a discreet manner and have averted any mishap,” it added.